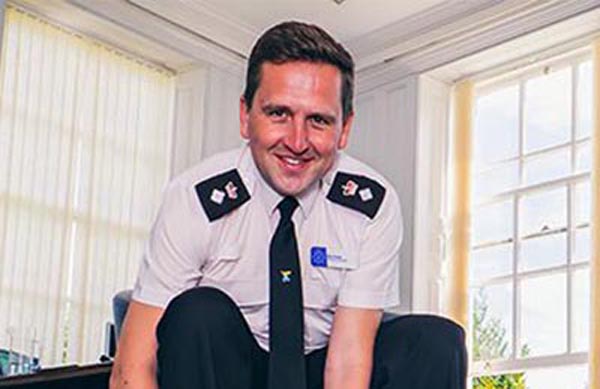 Chief Superintendent Nev Kemp, the former head of policing in Brighton & Hove, has been named as Senior Champion in Stonewall’s, 2017 Workplace Equality Index.

For the sixth time in eight years Sussex Police are featured in the Top 100 Employers Index at number 79 and the Sussex Police LGBT+ Network has also been recognised.

Ch Supt Kemp receives the award for his work as the forces LGBT+ Equality Champion – while being the divisional commander in Brighton and Hove, which included regular liaison and engagement with the LGBT+ communities across Sussex, and in the city; supporting events such as Brighton Pride, the annual Stonewall Equality Walk and his work supporting the independent Brighton & Hove LGBT+ Community Safety Forum whose role is to hold the statutory authorities to account on issues of safety affecting LGBT+ people in the city.

Ch Supt Kemp, said: “This award means a huge amount to me and I know from having spoken to colleagues, it means a huge amount to Sussex Police too. I believe strongly people perform at their best if they can be themselves. In policing we value courage and it is courage that many LGBT+ people have had to show just to be themselves. Making a stand as champion bought me into conflict on a personal level with a member of my family and sometimes the public and so I am sadly aware of the prejudice and discrimination that LGBT+ people have experienced. My own experience only made me more resolute. I have been proud to be LGBT+ Equality Champion, to be part of an organisation that values difference and I am overwhelmed to have received this award.”

Jane Carter, chair of the Sussex Police LGBT Network, said: “The inclusion of Sussex Police in the Stonewall top 100 as well as the network being recognised as a highly commended network group, is a significant achievement for the organisation.

“Both the inclusion and our placement in the index speak volumes about the efforts and initiatives that have taken place to promote and cement inclusion in the workforce. The Sussex Police LGBT Network is proud to continue to support this work and assist in any way possible to further encourage and reinforce the values promoted by Sussex Police.”

More than 430 employers entered the 2017 Stonewall Workplace Equality Index, the highest number of applicants since the index first opened in 2005. As part of the index there is a staff feedback questionnaire that participating employers can ask their staff to complete.

This year Stonewall received over 90,000 responses to the staff survey making it one of the largest national employment surveys in Britain, with 16,186 LGBT+ respondents.

For the full results and more information about Stonewall, click here: