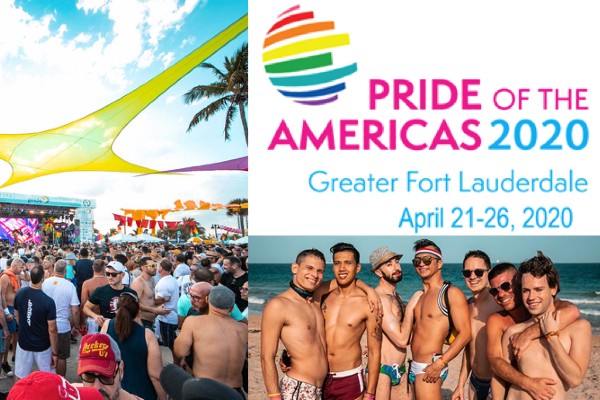 First ever Pride of the Americas

Aiming to bring together two continents and 53 nations under one love, this year’s Fort Lauderdale Pride hosts the very first Pride of the Americas in a six-day celebration running from April 21-26 instead of its usual late February dates.

More than 350,000 visitors, from Alaska to Argentina, are expected to join in the festival – which concludes with a parade and two-day festival on 25 and 26 April – to help bring global attention to the inequalities LGBT+ communities face in Latin America and the Caribbean.

Among the planned events are runway shows, an arts festival, an LGBT+ Health and Wellness Conference, a Travel Symposium, a Business of the Americas Conference and a Transgender Summit.

And, of course, there’ll be daily sunset concerts, beach party and other social activities at various venues around Greater Fort Lauderdale.

The six days of events begin on Tuesday, April 21 in downtown Fort Lauderdale and culminate on Sunday, April 26 with an epic beach festival and fireworks display.

A glamorous fashion show will feature designs by Bravo’s Project Runway alumni and local designers – modelled by male, female, transgender and drag models – at the Seminole Hard Rock Hotel & Casino in nearby Hollywood.

Stacy Ritter, CEO and president of the Greater Fort Lauderdale Convention & Visitors Bureau said: “We are excited for Pride of the Americas attendees to experience our cosmopolitan destination, as well as our beautiful melting pot of cultures.”

Richard Gray, senior vice president of Diversity & Inclusion at the Greater Fort Lauderdale Convention & Visitors Bureau, added: “Greater Fort Lauderdale is home to a thriving LGBT+ community, and we are very much looking forward to welcoming hundreds of thousands of LGBT+ visitors and allies to our destination where diversity shines brightly,” said.

Pride of the Americas will draw attention to the shared issues LGBT+ individuals, families, youth and seniors face in Latin America and the Caribbean. Key thought leaders from different countries will share their expertise at conferences and symposiums on human rights, business, travel, health and wellness, education and more.

The organisers says that, although Greater Fort Lauderdale is close in proximity to Latin America and the Caribbean, they are miles apart regarding the treatment and acceptance of the LGBT+ individuals in their communities. The event hopes to bring international attention to these inequalities while improving education and understanding of the LGBT+ community on a global scale.

Greater Fort Lauderdale welcomes 1.5 million LGBT+ visitors annually, spending $1.5 billion, so is well-suited to host Pride of the Americas. With hundreds of gay-owned and operated businesses and the highest concentration of same-sex couple households in the country, the destination is one of the most diverse and welcoming in the world.

Greater Fort Lauderdale is also the LGBT+ capital of Florida and is home to one of the largest Pride Centres in the country, the world’s first AIDS museum, the global headquarters of the International Gay & Lesbian Travel Association, and the Stonewall Museum, one of the only permanent spaces in the US devoted to exhibitions relating to LGBT+ history and culture. The LGBT+ Visitor Centre is co-located with the Greater Fort Lauderdale LGBT Chamber of Commerce in the heart of Wilton Manors.

The Greater Fort Lauderdale Convention & Visitors Bureau has been reaching LGBT+ travellers since 1996, when it became the first Convention & Visitors Bureau with a dedicated LGBT+ marketing department. Since then, Greater Fort Lauderdale has continued to break down barriers and facilitate visibility for the LGBT+ community at large, acting as a pioneer in the hospitality industry and ensuring that the destination is inclusive and welcoming with a diverse, safe and open community for all travelers.

Four years ago, it became the first destination in the world to create a transgender marketing campaign. Now the Greater Fort Lauderdale Convention & Visitors Bureau includes trans, lesbian, gay and straight people in all its mainstream marketing initiatives.

Greater Fort Lauderdale is committed to hosting this event with minimal environmental impact and will be ensuring that energy and water conservation, along with waste recycling programmes will be enacted throughout. Orgnaisers add: “Additionally, there are many efforts underway to safeguard the sea turtle population that will be nesting on our beaches during this time, including beach clean ups, securing of nesting sites and reduced artificial lighting near the shoreline.

“Nearly 90% of turtle nesting in the US occurs in Florida, with a large concentration occurring on the beaches of Greater Fort Lauderdale. Pride of the Americas 2020 has adopted the sea turtle as a fitting and informal mascot, commemorating this momentous occasion with one of Mother Nature’s most beloved creatures.

“While in town, you will have opportunities to explore our unique ecosystems and participate in wildlife and nature conservation programs on the beach and in the Everglades.”