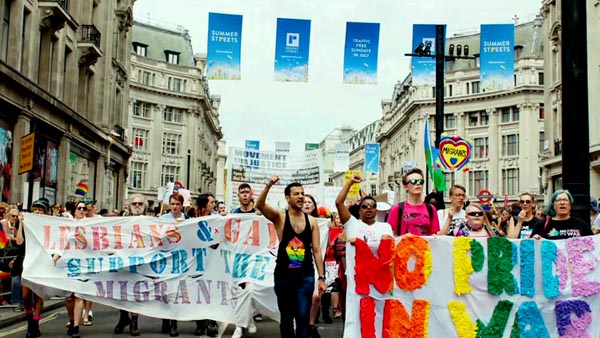 As we move towards Brighton Pride, Ashley Joiner’s 90 minute film Are You Proud?  is a timely reminder of just how far LBGT+ communities have come in the last fifty years and how far there is still to go.

WITH no narrative or strong directorial view point it tells the story of progress to equality and justice with dozens of face to the camera eye witness testimonials from activists, well-known and less-so who have lived through the struggle.

Prominent figures like Lord Michael Cashman and Peter Tatchell give us their insights along with many others whose names we are not familiar with but who nonetheless have an important story to tell – a story which a generation under 30 may well be less than well-informed about.

The film takes us from a closet gay corporal in the British army of the 1940’s right up to today’s activists, who are fighting for their own rights – for trans people, for those persecuted around the world and for the plight of LGBT+ refugees and asylum seekers in 2019 Britain.

Its historical view is fascinating – even to those of us who lived through the period – and it’s important to pay tribute, as the film does, to those early pioneers in the Gay Liberation Front, and the many groups it spawned like Stonewall, Outrage, Act-Up, the Terrence Higgins Trust and Gay Switchboard to name but a few.

Leading us on a learning cycle through Homosexual Law reform, and the Sexual Offences Act,  the infamous passing of Section  28, which outlawed the teaching of gay issues in schools, the film is never patronising nor lavender-tinted.

Some of its contributors have controversial points to make – particularly about the unacceptable faces of racism and intolerance that exist within some parts of  the LGBT+ communities.

It’s important that we don’t get hung up on slogans and labels, but the film does show the focussing effect a phrase can have – “Gay is good; gay is proud” coined by the GLF being one good example.

I also like the gutsy determination of many of the less-famous interviewees – especially  the one who calls out “Here, queer and fabulous”.

Though it highlights the many divisions that now manifest themselves within the various communities, it also points out that different groups have different issues and priorities and that there is surely room for all within the wider ‘family’.

As some contributors remark “freedom is never free; our journey continues. We are still a long way from home”.

It’s a film that should get a much wider audience. I would like to see it shown in every school in the country.

Are You Proud? will be screened at Duke’s at the Komedia Picturehouse, Brighton at 6.15pm on July 30 followed by a Q and A session with producer Dan Cleland.