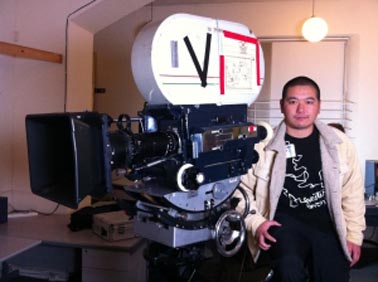 Brighton Film School graduate and local filmmaker, Liang Hu, is celebrating the success of a short documentary film he made whilst a student at the school.

James is a touching documentary that follows the story of an old man in Brighton. It explores themes surrounding loneliness and his sexuality.

The film is being shown at several festivals around the world, including Brighton’s own film festival, Cinecity, which runs from November 15 to  December 2.

On hearing about the nominations,  Liang Hu said:

“I was thrilled to have been selected by these festivals. Knowing my film has touched the judges and going to be seen by a lot of people makes me feel awarded.”

Liang also credited Brighton Film School with providing him with skills and confidence to enter the film industry.

Liang is hopeful that another of his short films, March will gain further recognition as it is also being screened as part of the Cinecity Festival.

Liang Hu was a student at Brighton Film School in 2012 and graduated from the Cinematography and Direction Pre-Masters course which focuses on teaching high level filmmaking skills.

As well as this high-level filmmakers course, Brighton Film School also teaches the Filmmaking HNC (equivalent to 1st year of a degree) that is suitable for College graduates and those looking to gain a foothold into the industry. There are also short courses in filmmaking, acting for the screen, art direction and screen writing available for complete beginners.

Brighton Film School is accepting applications for all of these courses with start dates in January, March and September 2013.

James is being screened at The Nightingale Theatre on the December 2 at 6.00pm.