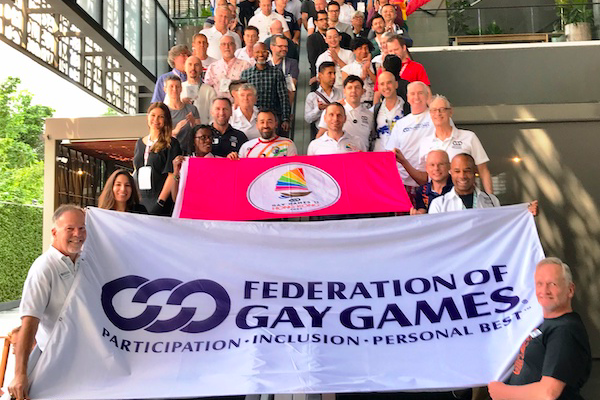 Brighton is to host the annual Federation of Gay Games (FGG) Annual General Assembly next week (November 8-12) as Covid travel restrictions forced a change of venue from Hong Kong, where the next Games are to be held in 2023, postponed from 2022.

Around 150 delegates are expected to attend – both in person and online – from the 26 participating countries, and a highlight will be the announcement at the Royal Pavilion on Thursday, November 11, of the host of the 2026 Games, with Guadalajara, Mexico; Munich, Germany; and Valencia, Spain all in the running.

Among events at the week-long Assembly will be a welcome to delegates on Sunday night by co-presidents of the FGG Joanie Evana and Sean Fitzgerald; David Chambers, general manager of Mercure Hotel; Sadie Mason, CEO of Active Sussex and GB Women’s Basketball Squad; and Rory Finn of Trans Can Sport. Wednesday sees the Memorial Moment at Dorset Gardens Methodist Church, honouring all those affiliated with the organisation who have been lost to AIDS and other illnesses. The Memorial Moment was founded in 1997 by a past board member, Brent Nicholson, who also founded the international Rainbow Memorial Fund.

Vice-president of external relations Shiv Paul, explains that Brighton was chosen to stand in for Hong Kong largely due to the work of FGG vice-president of operations Viv Woodcock-Downey, who lives in the city.

“It’s a very welcoming city to LGBTQ+ people and from a logistics perspective we had a very short time to get it together. Viv pretty much single-handedly organises the whole conference, so from that logistical perspective it was easier for her to arrange at the last minute. Also with those kinds of connections there are various organisations in Brighton & Hove that have been very supportive of us holding the conference there so have been very supportive and helpful.”

Each year at the Annual Conference the FGG also selects individuals or organisations that are doing great things for LGBTQ+ inclusion in the host city and this year its Excellence Award evening will be at the Amsterdam Kitchen & Bar on Wednesday November 10.