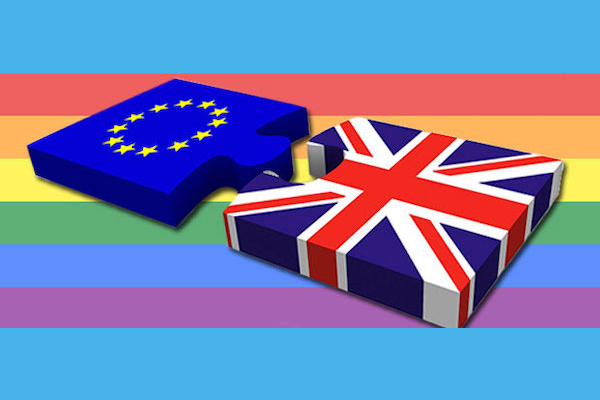 Matthew Tomlinson, Dean of the Leeds Campus at The University of Law (ULaw), offers insight on what Brexit means for the community, and what the current laws around LGBTQ+ issues could look like once Britain leaves the EU.

Perhaps the biggest protector of LGBTQ+ rights in British law comes from the EU’s Charter of Fundamental Rights, which legally protects LGBTQ+ people against discrimination. Article 21 of the Charter outlaws any ‘discrimination based on any ground such as sex, race, colour, ethnic or social origin, genetic features, language, religion or belief, political or any other opinion, membership of a national minority, property, birth, disability, age or sexual orientation.’

As Matthew adds: ‘The Charter is the highest level of law in the EU and Article 21 legally protects the LGBTQ+ community from discrimination based on sex or sexual orientation. However, this will cease to exist in UK law once Britain leaves the EU, which is a worrying thought. Taking away the Charter makes members of the LGBTQ+ community vulnerable to abuse or discrimination, purely based on their sexual orientation or gender identity.

‘Although this change won’t happen overnight, as the transfer of law making from the EU to UK Parliament will be complete after the end of the transition period in 2021, new UK laws must be put in place to replace the Charter to ensure members of the LGBT+ community are legally protected against discrimination.’

‘To understand more about what LGBTQ+ laws will look like after Brexit, we must look at where the majority of them have come from.’ Matthew explains: ‘Interestingly, before the passing of the Equality Act in 2010, which legally protects people against discrimination in the workplace based on sexual orientation, race or gender, the majority of LGBTQ+ rights in the UK came from EU Law and the Charter of Fundamental Rights.’

‘The past has shown that the UK is somewhat behind the rest of Europe when it comes to passing LGBTQ+ laws. As recently as 1997, there were no laws protecting LGBTQ+ people in the UK. Although same-sex marriage was legalised in the UK in 2013 and came into force in 2014, this was still many years behind other European countries, including The Netherlands (2001), Belgium (2003), Spain (2005), Sweden (2009) and Portugal (2010).

‘LGBTQ+ campaigners in the UK really pushed this legislation to be passed in Government, but 172 MPs still voted no. This does raise the question of whether or not same-sex marriage would be legalised by the Government on its own, if not pressed by campaigners.’

This altogether raises doubt about what LGBTQ+ laws will look like once Britain leaves the EU.

‘Although there are UK laws that protect people against discrimination, including the Equality Act, there is question that some laws that benefit LGBTQ+ people have only come into force into the UK because of EU Law.’ Matthew continues.

‘The UK Government will have free reign to make their own legislation after Brexit and current laws protecting the community could sadly be compromised. In the Government’s Brexit Withdrawal Agreement Bill (WAB), there is also a clause that allows British Courts to overturn rulings by the European Court of Justice. In a worst-case scenario, this could cause serious problems for the rights of the LGBTQ+ community.

‘For example, a ruling by the European Court of Justice named P v S and Cornwall County Council in 1996. This landmark case took place after a trans woman was dismissed from her job after telling her employers she was undergoing gender reassignment, which led to the prohibiting of discrimination against transgender people in employment or education. The clause in the WAB says British Courts can challenge and overturn an ECJ ruling, meaning the P v S and Cornwall Country ruling could be reopened and the courts may not find any violation of trans rights, meaning that the fundamental rights of the entire trans community could be compromised.

‘Additionally, new laws could be passed by the UK Government that counteract older laws, such as the Equality Act. As a new law is a more recent act of parliament, it would take precedence, which could cause more problems for the community.’

Summarising the role of Brexit on LGBTQ+ rights, Matthew continues: ‘The UK’s membership in the EU has benefitted and strengthened protections for LGBTQ+ people, with the Charter of Fundamental Rights, Article 21 and various laws protecting the community against discrimination in everyday life. It is certainly a worry that once we leave the EU in 2021, these rights could be lost as new laws could come into place.

‘It’s incredibly important that the laws and protection against discrimination are withheld once Brexit is complete. The Government needs to ensure that once this happens, sufficient laws are in place to protect the entire LGBTQ+ community. I hope the UK Government provides clarity to the community on what laws are in place to protect their rights post-Brexit, as this will understandably be a huge worry at this time.’