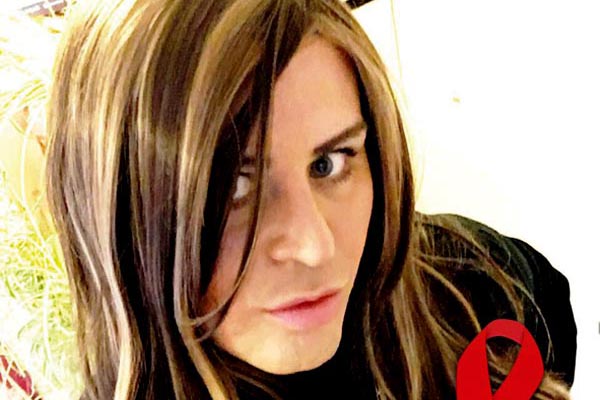 Ms Sugar Swan looks at her relationship with HIV as a trans woman.

I’ve been HIV+ for the majority of my adult life. I was diagnosed in my early 20s shortly after the death of my mother. I didn’t take her death very well and ran away to Europe for three months where I undertook some risky sexual practice as I was in a dark depression. Most traumatically I was gang raped by four men who took it in turns to rape me multiple times which left me not only with mental scars, but physically torn.

On my return to the UK, I was diagnosed with HIV along with three other STIs that were quickly eliminated through modern medicine. Given my experience and the trauma to my anus, my diagnosis was inevitable.

As I approach 40 I can honestly say that HIV in relation to my health isn’t something that I think all that much about, if at all. I’m very lucky that I was diagnosed early before the virus had a chance to damage my immune system and I’ve responded extremely well to HAART. Thanks to religiously regular testing we can pinpoint my diagnosis to the three-month period that I was out of the UK.

Nowadays it’s seen as best practice to get newly diagnosed HIV+ people started on HAART quickly after diagnosis for a few reasons. One being to protect the person’s immune system and another that bringing a HIV+ person down to an undetectable viral load makes them one of the safest people a HIV- person can have sex with, as having an undetectable viral load is statistically a safer way of preventing the spread of HIV than condoms.

Post-diagnosis, in the days when it wasn’t best practice to put people on HAART immediately, I was monitored every six months and never saw a fall in my CD4 count or a climb in my viral load.

I was one of the lucky ones that coexisted with HIV without it bringing secondary infections to my body. When a new medical trial came out, although I wasn’t seen as needing HAART at the time, I was asked if I’d be prepared to take part in the trial of a new drug regime.

Being the kind of person that I am, and thinking of my mother’s death and the people before her who trailed the cancer treatments that afforded her some extra years, I thought that if I tried something experimental it could help those in the future. I signed up to the trial without hesitation.

Some 10 years later and I’m happy to report that after the initial two-year trial I’m still on that same combination of drugs and I’ve been undetectable since I started. I’ve a super high CD4 count of over 1,000 (greater than many a HIV- person). It warms my heart when a newly diagnosed person turns to me for support around medication and its side effects and I ask what combination of HAART they’ve been recommended and they report it’s the same regime that I was a guinea pig for, that works so well for me and that I still adhere to.

I’ve a very healthy immune system and HIV hasn’t held me back from doing anything. From a medical point of view I’m one of the HIV success stories. Unfortunately from a social point of view, especially as a trans woman, the same cannot be said.

Pre-transition, living in Brighton, and being viewed as an MSM (men that have sex with men), I found living with HIV pretty easy. There was very little stigma. MSM in Brighton are pretty clued up about HIV in my experience and disclosure of one’s status, whilst sometimes leading to sexual rejection, was fairly simple.

There’s a large community of MSM with HIV in Brighton and finding people to talk to, confide in, make friendships, have intimacy and relationships with, was pretty straight forward. There’s always been a huge push on education around HIV within the MSM community which I’ve been part of while working in THT’s Ship Street offices for many years seeing clients one to one to help them navigate the world.

It’s impossible to go for a drink in a gay venue without being educated with posters everywhere and free condoms and lube. There’s a lot of education on PeP and PrEP and freely available information on support groups and networks. The message is loud and clear, it’s getting through and that’s great. Living as an out and proud positive MSM was achievable.

However, things haven’t been the same since transition. I’ve felt like I’ve been forced back into the HIV closet and that’s somewhere I stayed in early transition. Living as a trans woman, in my opinion, carries a lot more stigma than living as a HIV+ MSM.

Living as a trans woman with HIV feels like you may as well just give up! Awareness is next to non-existent. Dating is a whole new minefield and people are completely shocked that I’m positive. Sexual rejection rates are much higher, which leaves me asking why?

I believe the answer is education. Sexual health awareness isn’t as highly publicised in other communities as within MSM. This means I’m left to educate people myself and after giving them trans 101, giving them STI and HIV 101, that is, to those who hang round long enough to listen, I’m spent.

I was interviewed by Prof Jaspal for this study and he’s working to address the gap in knowledge around HIV in trans communities. Global studies suggest that trans women are at higher risk of HIV infection than other groups in society (up to 49% more likely); however, there’s no UK data at present.

It’s suspected that stigma around both HIV and being trans and worries of interactions between HAART and HRT, are keeping trans women away from coming forward and being tested.

I felt honoured to have taken part in this most valuable ongoing research. Having been a service user of the Claude Nicol Centre and Lawson Unit since 2002, it wasn’t long into transition that I was made aware of ClinicT.

ClinicT, a sexual health service for trans people, is run by Dr Kate Nambiar, Clinical Research Fellow & Speciality Doctor in Sexual Health and HIV Medicine. I find ClinicT a great resource – for me it’s a one stop shop where I can have my HIV and HRT blood levels checked at the same time as having a sexual health screen.

I asked Dr Nambiar about the service offered at ClinicT and she told me; “I was really glad to be able to start ClinicT. From a personal point of view, as a trans woman, I had spent a lot of my life running away and hiding from being trans. I think it was a personal revelation to be in a position where I could give something back and use not just my knowledge as a doctor but also my experience living as a trans woman.”

Dr Nambiar’s words resonate with me as running and hiding from being trans and now being in a position to give back, using my experience as a trans woman, is something that we both put into our work.

It’s my hope that by coming forward, outing myself so publicly and speaking of my experiences as a trans woman living with HIV, that I’ll bring other trans positive people out to talk about this, to take part in Prof Jaspal’s study, to go to ClinicT to get screened and ask for the help they need to navigate both sexual health and trans specific healthcare services. Failing that, just contact me and we can go for a cup of tea and share our experiences.

I look forward to seeing you at the WAD vigil at the AIDS Memorial on New Steine, Friday Dec 1 at 6pm!