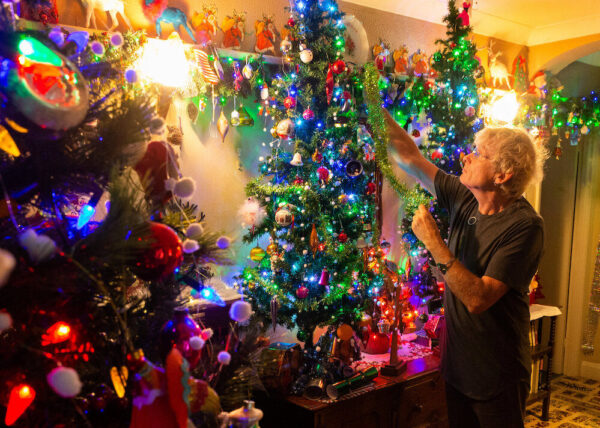 Seaford resident Geoff Stonebanks, has a real love of Christmas! From a very early age, he has just loved Christmas. Over the intervening years his amazing collection, some going back to the 1930s, has garnered much media attention across the UK. From the Daily Mail back in 2017, through to This Morning with Philip and Holly and a pre-recorded Christmas programme on Channel 5, not to mention all the local media coverage both in print and on BBC South East Today.

Through his childhood, Geoff’s parents had a public house which his mother decorated for the festive period. Joining her to complete the task, from about the age of seven, he soon took over and was left to his own devices to get on with it. The pub opened right over the Christmas period and customers came from far and wide to see his handiwork, while enjoying a drink or two! When his parents retired in 1987, he inherited the pub’s collection to add to his own items.

This year though, something a little different! Geoff’s gone international, well, European at least. ZDF, the national German broadcaster, visited his home twice in recent weeks. They came on November 24 to film him emptying his 40 crates of decorations and setting up a couple of trees and again on December 6 to film the finished look.

From hand-carved wooden nutcrackers to scrumptious stollen, there are many German Christmas traditions which have been around for centuries. The German Christmas season officially begins with the first Sunday of Advent, which was November 27 this year. Almost as early as Geoff’s Christmas usually begins! Every year it takes him a week to get all the decorations up in the house in order to switch all his lights on by December 1. That said, he’s always had enough by New Year’s Day and they start to come down.

In a nod to the filming, he has adopted a slightly German feel to his festivities this year. He already has a small collection of nutcrackers which, according to German folklore, were given as keepsakes to bring luck to the family and protect the home. It is said that they represent strength and power and watch over the family keeping evil spirits and danger away.

Also in his collection is a Christmas candle pyramid, which is known as the Weihnachtspyramide. While the candle pyramid is popular throughout Europe now, as well as in the US., it was originally found in the Erzgebirge, the Ore Mountains between Germany and the Czech Republic. The same area is also known for its wooden toy making tradition too. Once upon a time, people danced around a St. John’s tree, a pyramid of flowers and garlands, around the time of the summer solstice. Eventually this custom, some say, evolved into our modern Christmas tree. Luckily Geoff has a large collection of these wooden toy decorations, but their origin is from the US on visits there over the last 30 years. They will however add to the allusion.

Another German invention is the Advent Calendar, which was originally designed to involve children in the festivities leading up to Christmas. Geoff has purchased a new one every year since childhood and his 2022 version is quite special.

According to Geoff, one of the most important Christmas traditions by far is the decorated Christmas tree. This custom of an indoor tree was introduced into Britain by Prince Albert who came from Germany. This year, Geoff had over 30 decorated trees of varying sizes on display for the film cameras to capture. He has placed one out in the garden too.

Not only does he take pride in decorating the house, Geoff loves to take pride in wrapping the presents the household receive. Over the years he has used wired ribbon, which although quite expensive to purchase can be used year after year, as he carefully unties and roll ups the pieces after presents are opened. Some shown in picture are on their fourth or fifth outing.

The film aired on ZDF’s lunchtime magazine programme Mittag Magazin on December 9. Additionally, on December 6, BBC journalist Chrissie Reidy, and a crew from BBC South East Today, visited and aired a short film on the evening bulletin the same day. You can view both films on Geoff’s Christmas website.

This year, Geoff has been posting an image a day to his social media channels, featuring Christmas decorations for each letter of the alphabet. Some say he’s going to be in trouble for the letters X and Z, but Geoff has a plan.