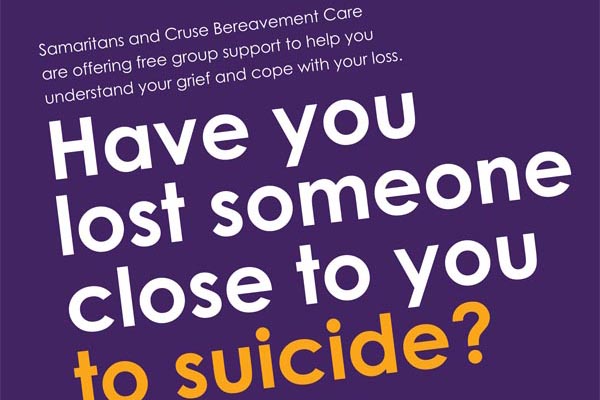 Free support groups for people bereaved by suicide set up by Samaritans and Cruse Bereavement Care have been running in Brighton and Hove since October 2016.

FACING the Future groups – each with a maximum of eight participants – are free of charge and available to anyone over 18 who has been bereaved by suicide.

Each group session runs once a week over six consecutive weeks and lasts for 90 minutes. The bereavement does not have to have been recent, although the service is designed for people bereaved for more than 3 months.

The groups are jointly led by experienced Samaritans and Cruse volunteers who have received specialist training in helping those bereaved by suicide.

Nine groups have already taken place and more are planned for this year. The next one is due to start on Tuesday, April 30 at 6.30pm at the Brighton, Hove and District branch of Samaritans.

Feedback has been very encouraging:

“It has helped me to stop feeling responsible for what happened, and to understand that it is not unusual to feel that way.”

“It gave me a space where I could process my thoughts and what had happened.”

“It has helped to speed up the healing process, I’m in a better place now than when I started.”

If you’re interested in attending a group, you can register online at www.facingthefuturegroups.org or call 0208 939 9560.

It’s really straightforward and you are very welcome to attend even if you’re already receiving other forms of support. Within two working days you’ll get a call and receive all the information you require, including what to expect and when groups are expected to start so you can plan them around your other commitments.