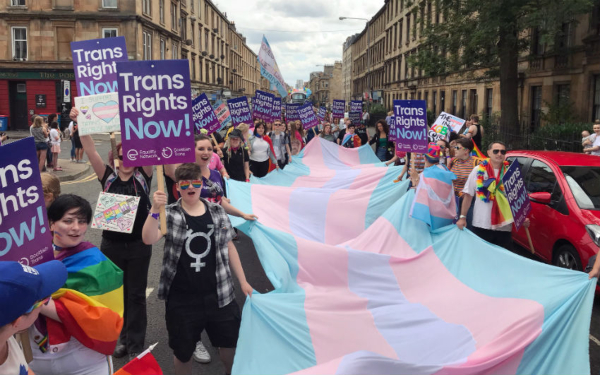 According to Scottish Trans Alliance, Equality Network, LGBT Youth Scotland, Stonewall Scotland and LGBT Health and Wellbeing, the draft bill is a step in the right direction towards greater equality for transgender people in Scotland.

The Scottish Government previously ran a four month consultation in 2018 on how the Gender Recognition Act, which dates from 2004, could be improved. They received over 15,500 consultation responses. Two-thirds (65%) of Scottish respondents agreed with the proposed reform to a statutory declaration system.

The Scottish Government draft bill aims to simplify how transgender people change the sex on their birth certificates. The key changes are to:

“We welcome the Scottish Government’s publication of their draft bill to reform the Gender Recognition Act. The current process to change the sex on a trans person’s birth certificate is a humiliating, offensive and expensive red-tape nightmare which requires them to submit intrusive psychiatric evidence to a faceless tribunal panel years after they transitioned.

“What’s written on a trans person’s birth certificate is not the deciding factor for their access to single-sex services or sports competitions. The reasons trans people change the sex on their birth certificate are so that they no longer have the worry of being ‘outed’ by that last piece of paperwork not matching their other ID, and to be sure that, when they die, nobody can erase their hard-won identity and right to be recorded as themselves.

“We are very pleased that the draft bill is based on statutory declaration not psychiatric evidence and that it reduces the age for application from 18 to 16. However, we are disappointed that the Scottish Government has chosen not to include under 16s or non-binary trans people in the draft bill. We urge the Scottish Government to expand the bill so that all trans people can have equal inclusion and acceptance within Scottish society.”

During the recent UK election campaign, First Minister Nicola Sturgeon was asked about reform of the Gender Recognition Act and replied:

“The reform of the Gender Recognition Act is about making the process of legally changing gender less intrusive, less bureaucratic and less traumatic for trans people. It doesn’t change the situation of single sex or women’s only spaces, that is governed by the Equality Act, which we are not proposing to change. You don’t need a gender recognition certificate to access women only spaces right now.

“I am a supporter of trans rights, I’m a supporter of women’s rights and I think it is incumbent on people like me to demonstrate that those things aren’t and needn’t be in tension and in competition. I am a lifelong feminist. I would not be proposing or arguing for something that I thought would be ‘trampling women’s rights’.”

“LGBT Youth Scotland welcomes today’s announcement and are pleased that transgender young people over 16 are included in the draft bill.

“We support the proposed changes to enable 16 and 17 year olds to change their legal paperwork to align with their gender identity, recognising trans young people’s right to privacy and to be protected from discrimination. In Scotland, 16 and 17 year olds are allowed to vote, leave school, get married and have children. They can already change the sex on their passports and education records. It makes little sense to deny them the protections that updating their birth certificate affords them.

“We share young people’s disappointment that there is no inclusion of non-binary people in this draft bill and no process for under 16s who wish to obtain legal recognition of their gender. We do, however, recognise that progress takes time and regard today’s draft bill as a steppingstone to full legal recognition for trans people. LGBT Youth Scotland will strive to bring trans young people’s views and experiences to the fore during this consultation and we will work closely with our Youth Commission on gender recognition as we develop our organisational response.”

“As a lesbian feminist woman, I know that trans rights are not in contradiction of, nor counter to, the fight for women’s rights and equality, of which I am part. Scotland’s national women’s organisations broadly support the reform of the Gender Recognition Act to a statutory declaration system. Now that the draft bill has been published, it is very clear that it does not make any changes to the Equality Act’s single-sex services provisions, so will have no effect on the way single-sex spaces can choose to operate.”

“Scotland has a proud history of being a progressive country and this Bill gives us the chance to help trans communities be recognised for who they are. Reforming the Gender Recognition Act to replace the current dehumanising, medicalised process with a process of statutory declaration would be life-changing for many trans people. However, we’d like to see the Bill go further to recognise non-binary identities, so every part of the trans community can benefit from the legislative change.

“Trans people have suffered for too long from inequalities that can be easily removed. So we need everyone who cares about equality to ‘come out’ in support of reforming the Gender Recognition Act and respond to the government’s consultation on the draft Bill.”

“LGBT Health and Wellbeing welcomes the draft bill and the opportunity for trans people and their organisations to re-affirm the importance of a more accessible and respectful gender recognition process. Improving the process will relieve a lot of stress for many trans people, who currently struggle to gather complicated evidence and medical reports just to be recognised as who they are. It is only right that at significant points in the life course, such as accessing pensions or getting married, trans people’s paperwork matches who they are – something the majority of us can take for granted. We remain disappointed that recognition for non-binary people is not included in the proposed changes and we urge Scottish Government to take positive steps towards ensuring everyone can be recognised for who they are.”