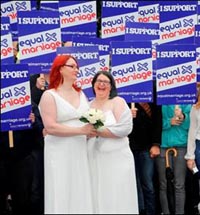 The prestigious annual awards, run by SCVO (the Scottish Council for Voluntary Organisations), recognise and celebrate the efforts of charities, community groups and individuals dedicated to making Scotland a better place to live.

Equal Marriage, the UK’s first major campaign for same-sex marriage, was launched by the Equality Network in 2008. Since then the campaign has put the issue on the political agenda, engaged thousands of supporters, and successfully encouraged the Scottish Government to commit to legislation.

The People’s Choice Award is decided by a public vote and equal marriage supporters can vote for the campaign by visiting: www.equalmarriage.org.uk/vote

Tim Hopkins, Director of the Equality Network, welcomed the nomination as a tribute to the efforts of many.

“The fact that the Equal Marriage campaign has been shortlisted for the Scottish Charity Awards is a fitting tribute to the efforts of lesbian, gay, bisexual and transgender (LGBT) people, and their supporters, who have fought for equal rights over many decades and in the face of much adversity. As Scotland moves towards full equality for LGBT people, we are honoured that the judges have chosen to recognise this important and historic movement. It is a mark of just how far we’ve come as a society that the fight for LGBT equality is now being recognised and celebrated, when homosexuality was still criminalised just a few decades ago. SCVO’s awards play a valuable role in highlighting the efforts of third sector organisations and that’s why we are delighted to be part of this year’s celebrations.”

“Everyday people working and volunteering in charities right across Scotland make a difference to the lives of hundreds of thousands of the most vulnerable people in our communities. These awards celebrate the positive impact this makes and the tremendous effort made by charities and volunteers.”

Over the past five years the Equal Marriage campaign has involved many thousands of people and diverse communities from across Scotland, including equality and human rights bodies, faith groups, trade unions, and youth and student organisations.

The Marriage and Civil Partnership (Scotland) bill is set to be tabled in the Scottish Parliament this summer, giving MSPs the opportunity to vote for equal marriage and take Scotland a major step towards full equality for LGBT people.

The Equality Network say it is vital that supporters continue to write to their MSPs and support the campaign, pointing out that opponents of same-sex marriage are continuing to spend tens of thousands on efforts to block or amend the legislation.

Scotland decriminalised homosexuality in 1980, thirteen years after England and Wales. Since then the country has gradually introduced greater equality, and the Equality Network say that, if passed, equal marriage will be an historic step towards full legal equality for LGBT people.