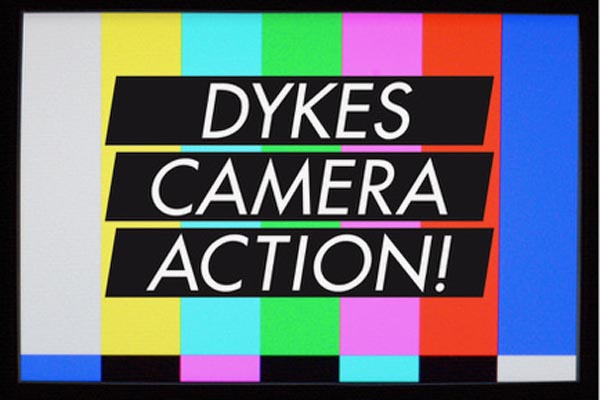 A History of Queer Cinema from the women who made it happen!

DYKES, CAMERA, ACTION! will be screening at this year’s Raindance Film Festival on October 3 & 5 October with Special Q&A on October 5 with Caroline Berler.

Lesbians didn’t always get to see themselves on-screen. But between Stonewall, the feminist movement, and the experimental cinema of the 1970s, they built visibility, and transformed the social imagination about queerness.

This feature-length documentary covers the history of queer cinema from the early days as a marginalised sub-culture, to the 1990s which saw the rise of New Queer Cinema, up to the present.

The film examines the ways that women directors have contributed to this genre and emphasises the role that the media plays in representation of sexuality and gender, underscoring the power that film has to shape our perceptions of one another.

The documentary is not narrated; the filmmakers tell their own stories, blending personal experiences with a narrative about the evolution of lesbian cinema.

DYKES, CAMERA, ACTION! brings together humour, pathos, and political/historical moments to form the film’s arc: the larger history of the gay liberation movements in the context of cinema.

Caroline Berler, the Director, said: “I grew up in San Antonio, Texas, in the late 90s. Back then I didn’t know any openly gay adults in my community, so I looked to he movies for role models. Luckily, I came of age just in time to discover the amazing queer films that were coming out then – what I now realise was a watershed moment for queer cinema. These movies with lesbian characters at their centre, which I discovered in the aisles of my local video store, were the greatest source of comfort to me, and gave me hope for my future. I’ve probably watched ‘But I’m A Cheerleader’ and ‘High Art’ 5,000 times.

“Fast forward to New York City, 2016: I was earning my MFA in Social Documentary Film at the School of Visual Arts, and in search of the perfect thesis project to which I would dedicate the next several years of my life. I was doing some major soul-searching, trying to figure out what I truly cared about.

“Then, on Christmas Eve, I serendipitously ended up at sinner at the home of Rose Troche and learned all about her body of work and important contributions to queer cinema – including ‘Go Fish’ and the ‘L Word’ – and I was thoroughly impressed! After the night, I asked Rose if I might interview her about her life, career and her experiences as an LGBT+ activist. As soon as Rose and I started talking I knew there was a whole other side to the films that I loved so much growing up: the women behind the camera. I knew I had found the perfect film to make. From there I continued to find more of the amazing filmmakers who contributed to this history, and the film took on a life of its own.

“Most people don’t know this history. In early preview screenings in New York and LAA, I’ve been thrilled to discover how enthusiastically audiences respond to these women directors and their unique sensibilities, stories and ways of seeing. There aren’t enough films directed be women.

“Lastly, Dykes, Camera, Action! celebrates the power of film, with its ability to make us laugh, cry, transports us through storytelling and to inspire action.”