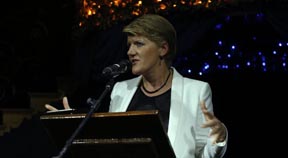 Money raised will fund the ongoing fight against bullying.

LEADING ORGANISATIONS and talent gathered in London at the Café de Paris on Wednesday, October 29 to support the third annual fundraising carnival and auction held by the anti-bullying charity, Diversity Role Models (DRM).

Guests were entertained by aerialist Will Davis and the evening also featured ‘Everyone is a Winner’ carnival stalls, including a Spin ‘n’ Win and DRM’s own Glambola.

By the end of the night over £75,000 had been raised to support the growth of Diversity Role Model’s work in schools across the UK.

Suran Dickson, Chief Executive of Diversity Role Models, said: “We are extremely grateful to everyone who attended Carnival for their generous support of Diversity Role Models and to all the performers and organisers who so kindly gave us their time. In addition, I would particularly like to thank the event sponsors – Accenture, Bank of America Merrill Lynch, Norton Rose Fulbright and Grey Goose – without whom the Carnival would not possibly have happened.

“The money raised will aid us in our plans to expand around the UK and ensure that all young people have the opportunity for success and happiness, regardless of sexuality or gender.”