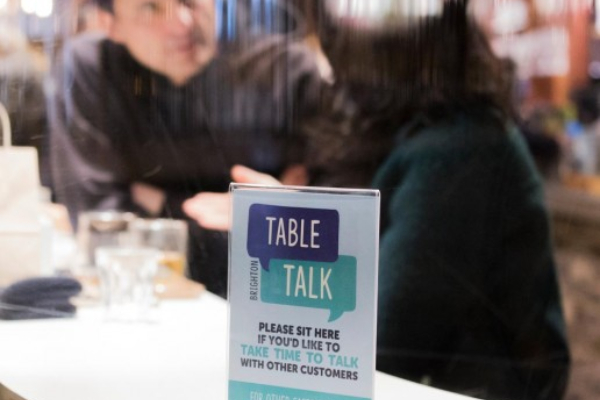 Sixty buses have become part of the push to make Brighton & Hove Britain’s first Talking City.  Brighton & Hove Buses has been working with local community group Table Talk to get people talking in cafes and on buses.  It’s a simple idea. Participating cafes put a Table Talk Brighton sign on one of their tables, where customers can sit if they are happy to talk to other people.

The bus company carries the Table Talk vinyl signs on the top deck of its 30 new route 5 buses, as well as on its route 12 Coaster buses between Brighton and Eastbourne, which all have tables.  Table Talk is the bright idea of Brighton & Hove resident Sue Epps, who came up with it after hearing people say they sometimes went days without speaking to anyone.

Sue said: “I want sharing to become the norm so most cafes have a table you can share. It’s about changing the culture. It’s a small thing you can do to slow down, spend time with people and create a warmer community.

“We are thrilled to partner with Brighton & Hove Buses. It’s a very important connection, as buses are the best way to get around the city and ensure all of our Table Talk cafes are accessible.”

More than 45 local cafes have already signed up and Brighton & Hove Buses has produced a list showing which buses serve each café, which can be found on the company’s website.

Sue said Table Talk had reached a turning point where cafes were contacting her asking to take part.  She plans to expand the Table Talk network to 100 cafes by the end of 2020 and to have volunteers there at specific times to chat to people, which means she must now look for extra volunteers and funding.  Baking queen Denise Dennis, who runs Cakes the Difference in Patcham, decided she wanted to join Table Talk earlier this year. She has even designated a ‘sharing table’ in her café.

Denise said: “People like it because it opens up conversation and the English [as a nation] tend to be a little more reserved. It’s older people it’s helped most, some of them struggle because it’s how they’ve always been. A lot of elderly people come here and they love it because they can catch the bus to the door.”

Brighton & Hove Buses’ Accessibility and Communities Manager Victoria Garcia praised the scheme: “With loneliness in the UK now at epidemic proportions, being part of something that actively encourages and enables people to talk to each other is a great idea. Buses are already a way of connecting people – like Table Talk does – so it was an obvious project for us to get involved with.

“We’re really pleased to provide our customers with information on how to get to participating cafes and also the opportunity to chat on board one of our own Table Talk buses.”

Information on cafes and bus routes:  or heck out the table talk website