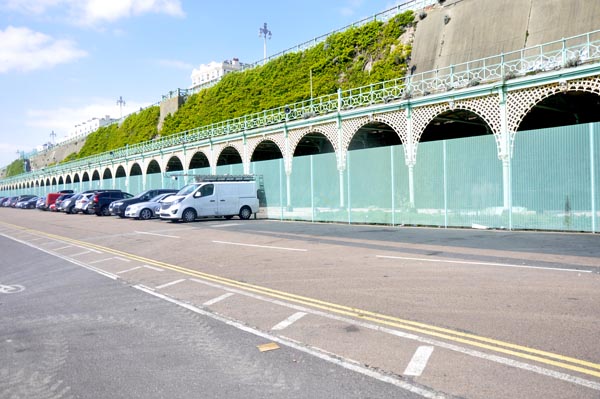 Queens Park Councillor says restoration of Terraces will ‘showcase what is possible’ and boost local area.

Clare Rainey the Green Councillor for Queens Park ward, had raised concerns that the keenly-awaited restoration of the Terraces could be further delayed if councillors did not use money available now to repair some arches.

A crowdfunding campaign for the restoration of Madeira Terraces in 2017 raised nearly £500,000 in donations from the public. However, despite funding being available to spend, Cllr Rainey raised concerns that residents had yet to see any restoration work begin.

Councillors had been asked to use the public donations to pay for design plans to be drawn up for 30 arches, despite no funding being available to complete a full-scale repair. Pointing to the insufficient budget to restore 30 arches, Cllr Rainey had called on councillors to instead consider repairing three arches as a way of “showcasing what is possible.”

Cllr Rainey said that long delays to the restoration of the arches had left many residents concerned the area was being “neglected” by the council.

Calling on the council to “showcase the potential of the arches” in order to attract further investment, Greens secured a commitment that the council would seek to restore three arches, and to consider the arches nearest the venue Concorde 2, using sustainable, eco-friendly building materials.

Cllr Rainey said: “Madeira Terraces are hugely historically significant and like Brighton Pavilion, the Palace Pier, the North Laine and the Lanes help to give Brighton and Hove its iconic status as a tourist destination.

“While out canvassing, and from attending numerous community meetings in Queens Park ward, I have consistently heard from residents that there is a feeling that the area has been allowed to fall into decline. Restoring at least some of the arches sooner rather than later will demonstrate that the area is being prioritised for improvement and investment. The three arches can be restored with a view to restoring all 30 when funds are available.

“The three restored arches will showcase what is possible, potentially increasing interest and investment from business in the overall restoration project. Madeira Terraces can showcase not only restoration work fit for current purpose, but also best practice of how innovative renewable technology, which will protect all of our futures, can be used in design, engineering and construction.”