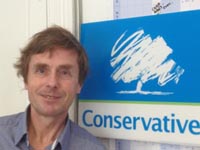 54 year old Robert was born in Brighton and has lived and worked most of his life in the City.

He was educated locally at Dorothy Stringer and Varndean Sixth Form College, and also went to both Brighton and Sussex Universities – gaining a BA (Hons) Degree from Sussex University in Geography and English.

He is a former civil servant with the Department for Work and Pensions, and is a fluent French speaker.

“I am standing in this by election in order to put out a positive message about what local Conservatives in Brighton stand for. I want to see the rubbish collected on time and the streets properly swept, a freeze in parking charges and council tax in order to help hard pressed residents and small businesses, no further extensions of controlled parking zones and a real effort made by the Council to tackle anti-social behaviour, bad landlords and crime.

“I am particularly pleased to be standing in Hanover and Elm Grove, where the Government is making massive investments in the local hospitals at Brighton General and the Royal Sussex County Hospital. I took early retirement from the Department  of Work and Pensions in order to become a full time carer, so I am well aware of the need to continue to support community nursing as well.”

“Robert is an exceptional local candidate, who impressed us greatly at the selection meeting. We have a really positive message to deliver in Elm Grove and Hanover.

“I am, for example, proud that the Conservatives in government have more than doubled the Pupil Premium, which has particularly benefited Special Educational Needs children at the schools which serve this Ward.

“We will be conducting a positive campaign in an area which has been taken for granted by the other parties for too long. Robert will put the residents of Hanover and Elm Grove first, and will make an excellent councillor.”