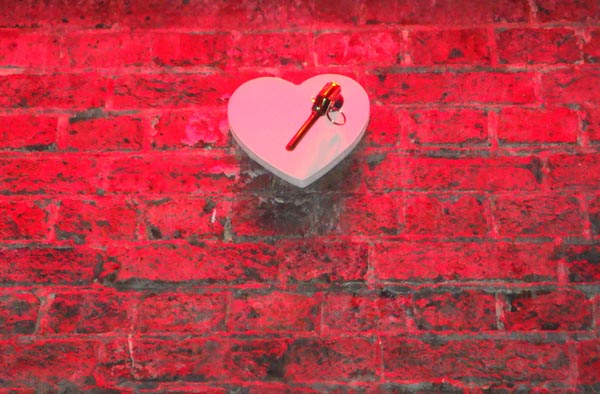 eel is a Brighton-based conceptual artist with a particular interest in spray cans.

HE SAYS his work often appears playful and simplistic at first glance, but on closer inspection reveals a deeper social context.

For example, he says his Proletarian pieces: spray can tops secured in a wooden frame by rusted barbed wire, represent the struggle of the working class and the restrictive nature of their position in society and lack of social mobility.

He says: “An artist may produce a piece with a distinct message, but someone may interpret that message completely differently. This for me is successful art. I don’t force the viewer towards a predetermined conclusion. I hope and encourage them to find their own meaning in my art.”

His recent works include a Morse Code piece, which was created for World Aids Day and is located on the outside wall between Clinic M and the Lawson Unit on Western Road. Its called I’ve got you under my skin, after the Neneh Cherry song. eel used Morse Code as an allegory of how HIV is hidden in plain sight and to focus on the lack of awareness of the virus. The bright colours also work highlighting the discrimination faced by HIV positive individuals; someone might like the piece but once they know it says HIV they may change their mind. eel specifically chose the spot at The Royal Sussex as it is equidistant between the Lawson Unit and Claude Nicole clinics, making a statement that HIV is not just a gay disease but affects everyone regardless of race, creed or sexuality.

His ‘Poppy Wreaths’, which are called Sacrifice were left at this years Remembrance Day services at the Brighton War Memorial on Old Steine and The Cenotaph in London. Each had a little ‘dog tag’ explaining the artists wishes that the pieces be donated to Blind Veterans and the Royal British Legion after the events. The small detailed framed, unglazed ‘Sacrifice’ pieces have been produced in a limited edition of 11 with all profits from sales going to Help For Heroes. They cost £125 each plus postage and package.

You can see eels latest piece Pull My Pin hanging in the tunnel under Brighton Station on Traflagar Street. He has produced 30 exclusive framed sculptures of Pull My Pin for Valentine day, costings £125 plus postage and package.

For more information and to purchase online, view: