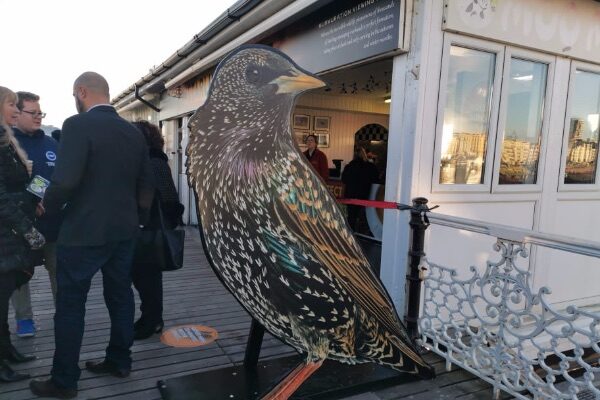 The first dedicated starling observation point and cafe opens on Brighton Pier, to celebrate and raise awareness of the starlings’ “beautiful murmuration”.

The Starlings’ Roost Cafe, is an observation point and cafe where people can watch the starlings perform their skyline dance at sunset, typically between the months of October to March.

The grand opening took place during the Golden hour, just before the starlings began to murmurate. Special guest and local MP Caroline Lucas,  gave a speech about the importance of biodiversity within the local area and hopes the cafe will make a positive impact on the declining population of starlings.

Starlings are a growing cause for concern as their numbers have dropped by 80% in the last few decades. While they are still in the “least concern” tier, their steep population decline is a growing problem. The main reason for the decline is, urbanisation of wildlife (concrete buildings) and pesticides.

The Cafe aims to raise awareness for starlings and the impact of pesticides on local aviation. Set up by a group of local starling enthusiasts, and with the help of Brighton Pier, they aim to share the beauty of the starling murmuration and to raise awareness for feathery wildlife in Sussex. They will serve hot drinks, food, and have a 24 hour streaming camera to watch the starlings underneath the pier.

Anne Ackord, CEO of The Brighton Pier Group, said: “Brighton’s starling murmurations have been hugely popular with locals and visitors to the city for decades, so it made sense to invite a local group of passionate starling enthusiasts and photographers, who assemble every night in winter to watch the murmurations, to work with the Pier to honour these special birds, and the result is the Starling’s Roost.

“We hope the public enjoy our new free exhibit, learn about starling conservation, help raise awareness, and share photos and videos of the starlings on their social media platforms.”

For more information about Starlings’ Cafe and more about starlings, click here.