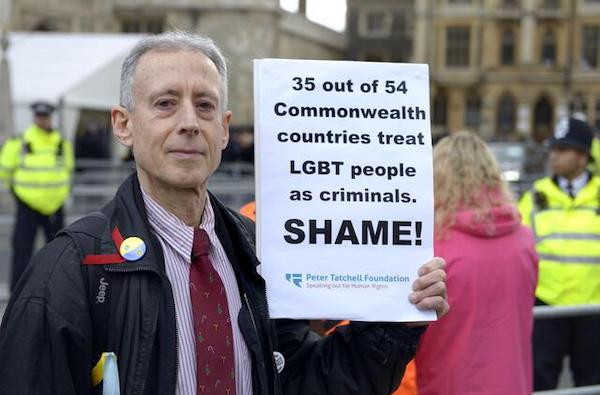 The Commonwealth Heads of Government Meeting (CHOGM) in Kigali, Rwanda, on June 24 and 25, yet again failed to even discuss – let alone support – the human rights LGBTQ+ people, which are routinely violated in nearly 70% of the member states.

Thirty-five of the 54 member countries of the Commonwealth association of nations, mostly former British colonies, criminalise same-sex relations. Seven have life imprisonment and in northern Nigeria there is the death penalty.

This is in defiance of the Commonwealth Charter which these countries have signed. It pledges equal rights and non-discrimination to all Commonwealth citizens.

For over 30 years, human rights defender Peter Tatchell has lobbied CHOGM to at least discuss the persecution of LGBTQ+ people and allow a LGBTQ+ person to address the assembled leaders. Every CHOGM for three decades have turned down all such requests.

Mr Tatchell said: “The Commonwealth is a homophobic institution. It is a bastion of anti-LGBTQ+ laws, discrimination and hate crime. LGBTQ+ issues have never been discussed, not even once, by Commonwealth leaders at any of their summits over the last three decades.​

“Surely, in 2022, Commonwealth heads of government should address the state-sanctioned persecution of millions of LGBTQ+ Commonwealth citizens.

“Most of these anti-gay laws were imposed by Britain during the colonial era in the nineteenth century. They are not authentic indigenous laws. Now that these nations are independent, they should be repealed as a continuation of the de-colonisation process.

“The Commonwealth Secretariat is an abject failure. It has sold out LGBTQ+ communities across the Commonwealth. The Secretary General, Baroness Scotland, has shown no leadership; failing to speak out publicly against the intensified persecution of LGBTQ+ people in Ghana, Cameroon and Uganda,” said Mr Tatchell. ​

LGBTQ+ campaigners are urging the Commonwealth to:

“I have tried for 30 years to get the Commonwealth leader’s summit to discuss the criminalisation of LGBTQ+ people by more than two-thirds of the member states. They refuse and most also reject dialogue with their local LGBTQ+ movements,” added Mr Tatchell.

“Commonwealth countries account for more than half of the world’s 69 nations where same-sex relations are illegal. Hate crimes against LGBTQ+ people are widespread and unchecked in these countries.

“Millions of LGBTQ+ people living in Commonwealth nations have no legal protection against discrimination in employment, housing, education, health care and the provision of good and services. This makes a mockery of Commonwealth values and the human rights principles of the Commonwealth Charter,” concluded Mr Tatchell.