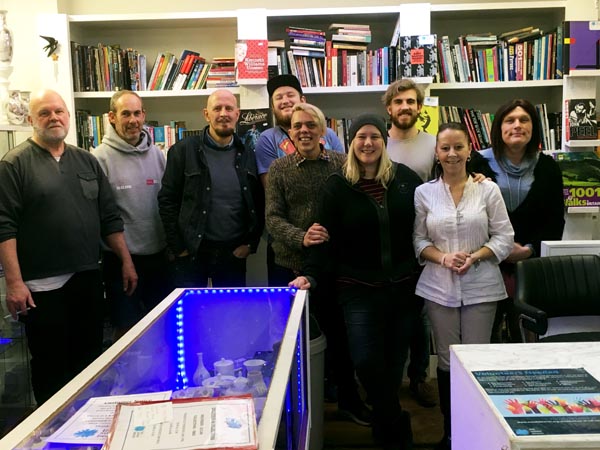 Bettina Zenz chats to Wayne Stone, trading manager at the Sussex Beacon charity shops, who runs a business with a difference that has gone digital.

WAYNE Stone is everything but your typical shop manager. In his role as Trading Manager at the Sussex Beacon, Wayne’s responsibilities are to ensure that his staff provide great customer service, monitoring the financial performance of the charity stores, managing budgets and donations, and supervising his staff and volunteers.

Rather unusually for a retail manager, Wayne is also a trained support worker for adults suffering from mental health problems. After working in social care for seven years, Wayne decided that it was time for him to get back into retail in 2012. He still wanted to use his social work experience, which motivated him to work for a non-for-profit organisation. “When an opportunity at the Sussex Beacon came up, it was perfect because my end goal was to work in the retail industry again, but I also wanted to carry on helping others”, says Wayne. He gradually worked his way up from a zero hours manager role, to his current position as Trading Manager at the Sussex Beacon’s busy charity shops in London Road and St James Street, Brighton.

Volunteers at the heart of the business
The shops are an important source of income for the Sussex Beacon, and many staff and volunteers are needed for the day-to-day running of the stores. What makes the Sussex Beacon charity shops different from many other retailers is the strong emphasis that is placed on recruiting, training and supporting their voluntary workers.

Current volunteers come from many different paths of life, and include former service users at the Sussex Beacon, new and established local residents, retirees, students, as well as vulnerable adults and people living with mental health disabilities. The charity shops have been recognised by the UK Volunteering Forum and Skills Training UK, a leading provider of apprenticeships, traineeships, work-based training/ learning and employability solutions, which has awarded the Sussex Beacon with the ‘Investing in Volunteers’ Award for two years running.

For many participating youngsters, volunteering with the Sussex Beacon charity shops marks a turning point, especially if they come from troubled backgrounds and have experienced problems at school.

“New volunteers can feel very insecure and often struggle to communicate when they first start with us”, says Wayne. Every volunteer is treated as part of the team from day one, and spends the first two shifts shadowing Wayne. During this time, Wayne tries to find out about their strengths and interests to allocate interesting tasks that “encourage skills they might not even know they have”, he explains. This can include learning how to use the tills and card machines, process stock and deliveries, list items for auctions and specialist buyers, and develop customer service skills, which are useful skills for career progression later on.

One of Wayne’s favourite stories is of a young volunteer at the London Road store who had failed his GCSEs and was bullied at school, which made making new friends extremely difficult. After volunteering at the Sussex Beacon for six months, his confidence had grown steadily, he enjoyed coming to work and was especially good at answering the phones. Eventually, he asked Wayne to help him with a job application for a position in the hospitality industry, where he has been working ever since. There are no guaranteed success stories as each case is different and there is not always a happy ending. The success stories do, however, always outweigh the negatives. “As my grandmother always used to say, you catch more flies with honey than with vinegar” laughs Wayne. “If you are nice to people, you will get the most out of them”, he adds.

Digital retail beginnings in 2018
This year is the start of new beginnings for the Sussex Beacon charity shops. Both stores are undergoing refurbishments and revamp their branding “so that people know that they are in a Sussex Beacon shop the moment they walk through the door”, says Wayne.

One of the most anticipated changes is the shops’ online presence. This includes the launch of four new social media accounts for Facebook, Twitter, Instagram and Shpock that will feature current promotions, stock and products, and enable the shops to reach out to the community directly. “Charity shops are not what they used to be, we face a lot of competition these days and cannot afford to miss out on engaging with customers in this digital age”, explains Wayne.

Using social media to build strong links with the local community is a matter that is close to the Sussex Beacon’s heart. The charity has always thrived under the support from local people whose generous donations have helped to raise important funds that are needed to support people living with HIV in Brighton and Hove. Wayne adds, “We are very lucky to have so much local love and support, and are excited to use social media to take our shops into the 21st century”.

If you are interested in volunteering opportunities, email Wayne at wayne.stone@sussexbeacon.org.uk, or pop into one of the Sussex Beacon charity shops to pick up an application form.