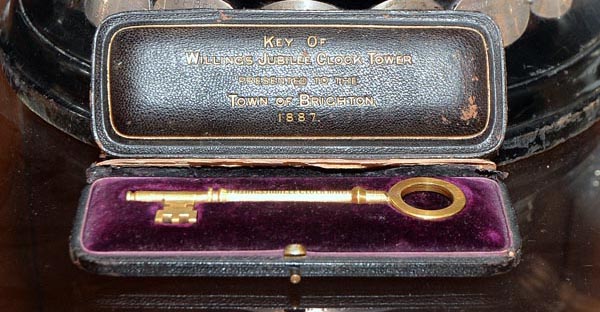 A key to the clock tower that was presented to the town of Brighton in 1887 has travelled all the way across the world to be returned to the city 129 years later.

Brett Dubois, the great great grandson of Alderman Edward Martin, the Mayor of Brighton in 1887, came over from Australia to present the key back to Brighton & Hove.

James Willing, who gifted the clock tower to the city, gave the key to Alderman Martin and the town of Brighton. It was then passed down from generation to generation of Alderman Martin’s family, finally ending up with Brett.

Brett and his partner, Yan Pothin, stopped by the Mayor’s office where they returned the key to Mayor Pete West and visited the clock tower.

Brett said: “The key should go back to the city of Brighton & Hove so other people can see it and learn about this piece of history.”

This is not the first time that the key has made the journey from Australia to Brighton as Brett brought it in 2013 and his grandparents came with it in 1962. However, this time it will stay with the city.

Mayor Cllr Pete West said: “It was great to meet Yan and Brett; their key unlocks a significant part of the city’s history and we are pleased to be its custodian once more. Former Mayor Cllr Denise Cobb and I were delighted to welcome it home.”