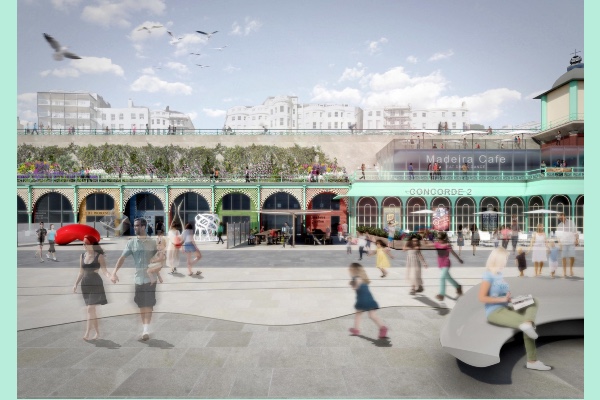 Concept design work for the Madeira Terrace restoration project has been given the go ahead by the Policy & Resources Committee.
The project, which is sometimes called MT30, is the first stage of restoration and aims to restore at least 30 of the 151 arches that make up Madeira Terrace.
The Policy & Resources Committee noted the RIBA Stage 0-1 conclusions detailed in the report prepared by architects leading the design team, Purcell. It was then agreed to authorise the Executive Director for Economy, Environment & Culture, in consultation with the cross-party Madeira Terrace Project Board, to agree the next stage of design work.
A further report will come to the committee when the design team are ready to present the final design with associated costs and to request permission to advertise tenders for contractors to carry out works.

Madeira Terrace, originally built as a covered promenade to attract tourists from London when the new railway opened in the late 1800s, is considered the longest cast iron structure in Britain, running from the Aquarium Colonnade to the Volk’s Railway maintenance building.
Cllr Clare Rainey, lead member for the Madeira Terrace Project Board, said: “Although we are still early on in the restoration process, this ‘go-ahead’ marks an important beginning in the restoration of our city’s historic arches.
“Our city’s communities are extremely passionate about the future of Madeira Terrace and we are all keen to know that plans for restoration are underway.
“After years of neglect, it is good to see that we have made such an excellent start, and I want to thank everyone for the part they’ve played in the positive moves being made on this project, as we now progress to the next stage.
“I look forward to seeing more of what is to come from the design architects, as will so many in our city who also want a future for the arches.”
you can read the full report here: