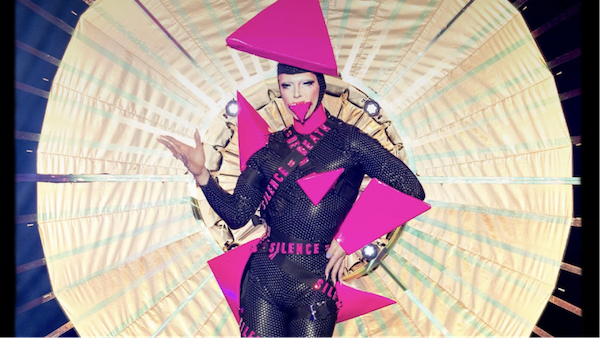 In October, Cheddar Gorgeous was applauded for their disruptive contribution to the ‘tickled pink runway’ on RuPaul’s Drag Race UK. Donning an outfit composed of pink triangles and the Silence=Death slogan – inspired by the ACT UP! movement of the 1980s and ’90s – they led a powerful werkroom conversation about the complex relationship between HIV, homophobia and shame.

The upward-pointing triangle was a symbol reclaimed by the activist group ACT UP during the AIDS crisis. It was previously used during the holocaust to demarcate gay men in concentration camps. THT said in a release: “While representation on platforms like Drag Race is important, it’s imperative to ensure that these moments of recognition are translated into calls for action. The real activism is done day in day out by organisations working to support people living with HIV.”

The raffle will have two prizes, with the first prize winning the runway look, as well as an invitation for the winner and a guest to attend the LGBT History Month exhibition in Manchester. The outfit will be on display there from Wednesday, February 1, 2023, as well as an overnight stay in the Kimpton Clocktower Hotel.

The runner-up will receive an invitation for two to attend the LGBT History Month exhibition event on Wednesday, February 1, 2023 and a meal at The Refuge restaurant.

All proceeds after platform and credit card fees will be split equally between George House Trust and Terrence Higgins Trust.

Darren Knight, Chief Executive of George House Trust, said: “Cheddar is an absolute legend on every level, giving their time freely, gladly, and warmly to George House Trust for many years. We’re delighted that we’ve got such an amazing ambassador, supporter and friend who is a force for good.

“Cheddar understands how HIV has changed and also that fear and stigma still exists. They articulated that on Drag Race by shining a spotlight on HIV activism with this iconic ACT UP runway look and through educating everyone watching that Undetectable Equals Untransmissable.

“The way Cheddar used their platform to educate the Drag Race audience and beyond about HIV is extraordinary and exactly what we love, from someone who shares our vision of a world where HIV holds no one back. We’re so grateful to Cheddar for supporting people living with HIV and helping to end HIV stigma by raffling off this incredible look.”

“What was even more powerful was the werkroom chat with the other queens that will have educated so many people about the realities of HIV today, including that someone living with HIV and effective treatment can’t pass it on.

“We’re very grateful to Cheddar for their continuing work to tackle HIV stigma and for raffling off this iconic look to benefit people living with and affected by HIV.”