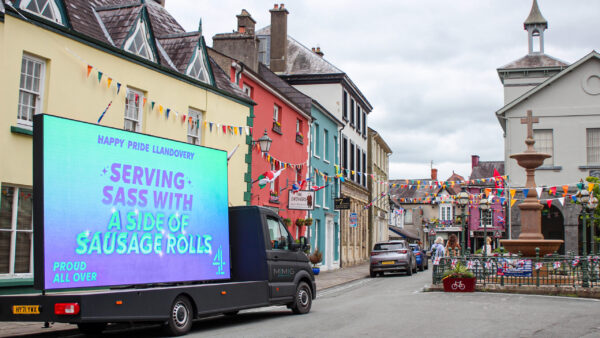 Channel 4 is marking the 50th anniversary of the Pride movement by celebrating over 80 Pride celebrations around the nation, which are happening alongside the major city events. The concept has come from 4creative, the channel’s creative agency.

Proud All Over is challenging the idea that people have to travel to big cities in order to celebrate Pride, and will instead shine a light on allyship in smaller regional communities.

At the heart of the campaign is a TV trail airing Saturday, June 25 and starring comedian Tom Allen, who encourages everyone to celebrate Pride nationwide. Directed by Robert Strange (blinkink) and showing animator and 3D wizard Alfie Dwyer’s surreal take on rural Britain, the Proud All Over film is “a psychedelic ‘trip’ around the country and ends with Tom on the summit of a glorious Scottish mountain”.

Meanwhile 4creative has also created bespoke copy-led ad campaigns celebrating more than 40 regional Prides the length and breadth of the country, from Exmouth to Shetland and from Folkestone to Llandovery.

Tailor-made straplines such as Queer as Folkestone, Llanelli – May Cause Excitement in Your Wetlands and Shetland – Everyone Remembers Their First Time (as it is their first ever Pride) will run across roadside posters, urban flyposter sites, major railway hubs and ad vans in more remote rural locations.

In addition Channel 4 has made social assets for over 80 Prides, which will appear on Channel 4’s Instagram accounts @channel4 and @thepinkpalace. For areas where there is no local Pride, people can still get involved using a specially designed Snapchat lens, which will reflect their location and can be augmented onto local buildings – spreading Pride nationwide. The campaigns will go live prior to each Pride event taking place.

The Proud All Over campaign will run on Channel 4 and All 4, culminating in a big weekend of star studded LGBTQ+ themed programmes from Thursday, June 30 to Monday, July 4. These include some of Channel 4’s biggest shows as well as new LGBTQ+ programming. There will be Pride specials of Gogglebox, First Dates and Steph’s Packed Lunch, documentaries including Freedom: 50 Years of Pride and a profile doc trans superstar April Ashley. The weekend will culminate with Joe Lycett’s Big Pride Party live from Birmingham on Sunday, July 3 with special guest appearances from Steps, Self Esteem, Rosie Jones, Olly Alexander and Tia Kofi and Tayce.

Zaid Al-Qassab, Chief Marketing Officer, said: “Channel 4 has always supported the LGBTQ+ community, and we wanted to continue that tradition in this historic year for Pride. Proud All Over is a different way of celebrating the smaller, less heralded Pride events around the UK which are in many ways even more important in breaking down barriers than those in the big cities. We can’t wait to see communities everywhere joining in.”