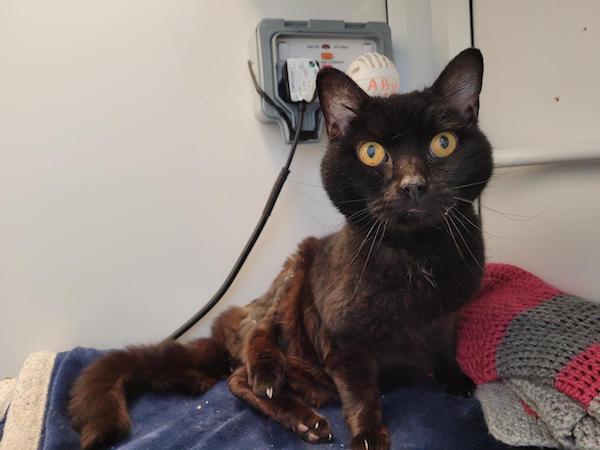 A Sussex animal charity is appealing for supporters to help foot vet bills after a badly injured cat was rescued from Eastbourne’s North Harbour.

Carers at Cats Protection’s Eastbourne Adoption Centre were called to assist when a 12-year-old cat with horrific leg wounds was found in pain and distress and taken to Eastbourne Vets in Seaside Road.

Due to the severity of the injuries, vets decided that the best course of action would be to amputate the cat’s leg. The charity agreed to take the cat into their care and he was transferred to Fairfield House Vets in Uckfield, who made him as comfortable as possible until his leg could be removed.

As part of his admission process, vets scanned for ID and found a microchip implanted by a vet in Southampton. Sadly, the chip had not been registered to an address so the cat –named Pedro – could not easily be reunited with an owner.

In a bid to trace Pedro’s owner, the charity put up posters in Eastbourne and shared an appeal on social media in the hope that someone would recognise him. So far, the appeals have come to nought.

Mandy Clarke, Manager of the Eastbourne Adoption Centre, said: “We don’t know how Pedro came to be so far from his original home, or what he has been through, but we are doing all we can to give him the best chance of a happy and healthy life.

“Pedro has shown himself to be a little fighter with the sweetest nature, especially when you consider how severe his injury was. He is so affectionate it breaks your heart. Everyone falls under his spell. He has stolen our hearts with his gentle and affectionate personality.”

Bills for the amputation and aftercare have already cost more than £500. As Cats Protection does not receive government funding and relies on the donations of supporters to cover such treatment and care for cats in need, the Eastbourne charity has set up a JustGiving appeal to help pay Pedro vet bills.