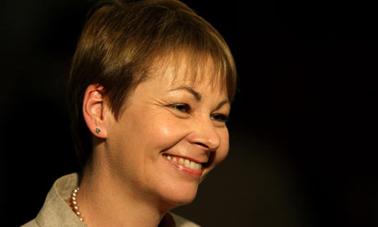 Caroline Lucas MP has been re-selected as the Greens’ Parliamentary candidate for Brighton Pavilion constituency for the next general election, in 2015.

The MP, who became the UK’s first ever Green Member of Parliament when she was elected in May 2010, said she will campaign hard for a second term to “provide the strong independent voice for Brighton and Hove that people deserve at Westminster”.

“Representing the people of Brighton Pavilion is an amazing privilege, and I’m delighted to have the opportunity to stand again in 2015 and continue my work.

“A crucial part of my role as MP is holding the Coalition Government to account over its chronic mishandling of the economy – and the failed austerity policies that are harming people and public services across this country.

“I’m determined to ensure that my constituents’ opposition to the hugely damaging cuts to welfare support continues to be heard loud and clear in Parliament, as well as carrying on my work to boost the local economy sustainably – such as playing a key role in the winning campaign to bring ultra-fast broadband to the city and ensuring the voices of small and independent businesses are heard.”

“Whether it’s using my position on the Energy Bill committee to lobby the government for urgent action to reduce fuel poverty to help many of my constituents struggling to stay warm in their homes, or generating a debate in the city about a fresh approach to drugs policy, I’m proud of the work I’ve been able to do so far.

“The most satisfying aspect of the job is being in a position to help the many people who come to my weekly surgeries and write to me on issues ranging from housing problems to benefit claims – and to raise their wider concerns in Parliament through debates and direct questions to ministers.

“There is enormous public anger about what the main political parties are doing to the economy and our public services – and people tell me that they value a strong independent voice in Brighton and Hove which offers a clear, green and progressive alternative.”