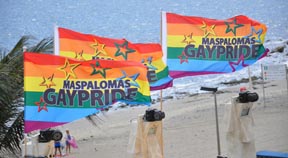 After thirteen successful years of Maspalomas Pride during the month of May, the founding organisers of the event are planning to stage the first Maspalomas Winter Pride in November 2014.

Organised by ProGay with the support of GLAY (Gay and Lesbian Association of Yumbo) and local authorities, Maspalomas Winter Pride will take place over three days from November 13 to 15 2014 in the iconic Yumbo Centre, featuring a range of internationally-known artists, events and entertainment especially designed to appeal to the island’s gay winter visitors.

Gran Canaria is the only destination in Europe to offer the perfect climate for an outdoor Winter Pride event and organisers believe the event will increase the numbers of vistors to the island and become a  valuable addition to the worldwide Pride calendar.

Once the event is established, organisers intend to replicate the business model employed by Maspalomas Pride in May and move Winter Pride to the start of December, which, as May had once been, is a period of low tourist occupation on the island.

It is hoped that Winter Pride will deliver a very significant boost to visitor figures and will generate tens of millions in extra revenue, not only for the businesses in the Yumbo centre, but for the tourist industry generally with sales generated from extra flights, hotel accommodation, restaurants, bars, shops and taxi journeys.

Amongst the confirmed live acts are: Baccara, Alcazar and Redd.

A ProGay spokesman said: “Standing still is like moving backwards. It’s important to always try to improve, innovate and offer the best quality possible. We believe the time is right for Maspalomas Pride, Winter Edition.”