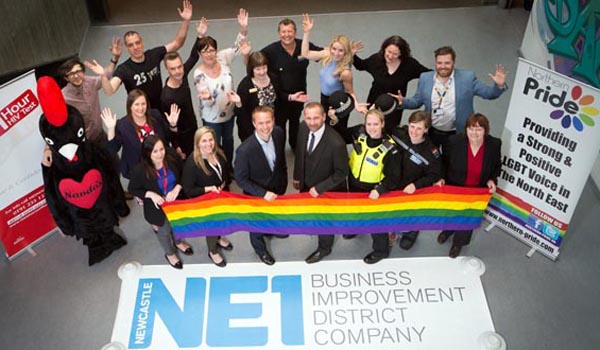 Businesses from across the North East give their backing to one of the UK’s largest free LGBT festivals.

Newcastle Pride, which attracted more than 71,000 visitors in 2015, is returning this summer with one of the biggest line-ups in its nine-year history, including headline performances by 5ive and Heather Small.

More than a dozen businesses from across the region have signed up to support this year’s event, including Business improvement District Company, NE1 who were recently confirmed as the Main Sponsor for a second consecutive year.

Stephen Patterson, Director of Communications for NE1, said: “Newcastle Pride brings one of the single biggest boosts to the North East economy every year, with around £9m generated in 2015 alone.

“Being able to support this event is something we are extremely proud of and it’s fantastic to see so many other businesses getting on board.”

NE1, which works to raise the profile of Newcastle as a regional capital city, will be joined in sponsoring Newcastle Pride 2016, by a number of public sector organisations, such as Northumbria Police, as well as companies from across all sectors.

Each company will sponsor a specific element of the festival, which runs primarily at Newcastle Town Moor from July 15 – 17, with overall support also being offered by Newcastle City Council, as well as media outlets Pride Radio and Made in Tyne and Wear.

A limited number of sponsorship opportunities remain for businesses that can support Newcastle Pride’s theme of be yourself, change the world, #beproud.

“Those who sign up as sponsors are offered a unique opportunity to engage with the LGBT community on a wide scale and to showcase their brand to a captive and receptive audience.

“It also sends out a powerful message of tolerance from each organisation and helps support of goal of removing social exclusion all together.”

Newcastle Pride 2016 will feature a weekend of live music and entertainment at Newcastle Town Moor from July 15 – 17, including performances by headliners 5ive and Heather Small, as well as stars such as Jake Quickenden, Sonia and Nathan Moor.

There will also be satellite events running at venues across the city during June and July, including a black tie ball and candlelit vigil.

Many of the events are free to attend, though a limited number of Gold Circle and VIP tickets, sponsored by Virgin Money, are available for those who want to guarantee prime viewing spots at the main stage weekend.