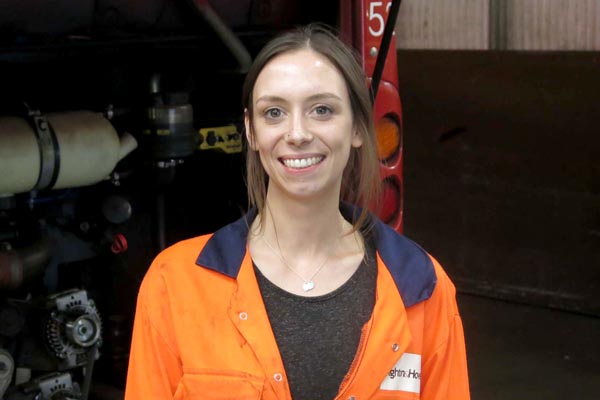 THE Brighton recruitment day at Churchill Square in May gives women the chance to get into the driver’s cab and to get the lowdown on what it’s really like to be a bus driver from some of the women who drive Brighton & Hove’s buses, with a similar event happening in Crawley in April.

Assistant Operations Manager Kirstie Bull began as a driver at Brighton & Hove in 1998.

She says: “Some women have the idea that it’s a big vehicle and they can’t drive it. I don’t know where that comes from because you can drive it.

“It’s a fantastic experience, I love it. The vantage point that you’ve got over other road users is great. Once you’ve cracked the size and the length, you’re in control. You can see everything that’s going on from behind the wheel.”

Kirstie has worked all around the business as a driver; mentor; supervisor and scheduler, as well as in customer services and finance. She also shadowed assistant operations managers at Go-Ahead London before becoming one back here in Brighton.

“Our focus is bringing more women into the industry. We’re up and coming for women. We’re doing more to attract them and to keep them,” she said.

Kirstie was appointed Assistant Operations Manager at Lewes Road depot last year and adds: “Once I stepped on to the ladder it all happened very quickly.”

Brighton & Hove Buses’ current driver recruitment campaign can be seen on buses and posters around the city. The campaign aims to show that drivers come from all different kinds of backgrounds and bring different talents, like ultra-marathon running, scuba diving or drumming to the table.

The company wants to recruit more women in all areas of the business, not just driving buses.

Kylie Griffiths is coming to the end of her three-year engineering apprenticeship at the company’s Conway Street depot in Hove. She’s also just been nominated for the Everywoman in Transport and Logistics’ UK Apprentice of the Year Award.

Kylie says: “It’s a very good company. I fit in fine with everybody, even though I’m quite quiet. I always have someone at work to support me and they’re always very keen to help me progress.”

She says her college teachers hold up Brighton & Hove Buses as an example to other students of a good company to work for.  “The company has supported me from the word go. It’s a really good group of people.”

Kylie is a diversity champion on the company’s employee-led Diversity and Inclusion group, which aims to boost the representation of women, LGBT+, BAME and disabled colleagues.

Brighton & Hove Buses’ Managing Director Martin Harris says: “We’ve set a target for women to make up at least 20% of our colleagues by 2021 and we’ll keep going once we hit it.

“Our internal culture is changing, partly thanks to our Diversity and Inclusion group and the Dignity and Respect campaign we run jointly with UNITE across all our depots, which promotes positive behavioural change.”