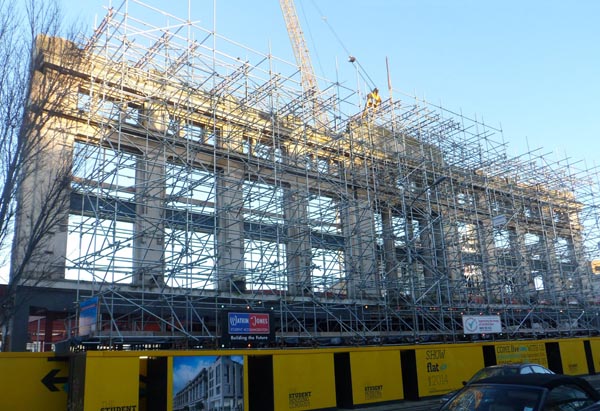 Construction company Watkin Jones and Son Ltd., has been fined £6,000 and ordered to pay over £3,000 in costs at Eastbourne magistrates today (Friday, November 7) for causing noise nuisance from a building site.

THE COMPANY was convicted of four charges of breaching section 61 of the Control of Pollution Act 1974 and fined £1,500 for each offence. It was instructed to pay costs of £3,511.48 to Brighton & Hove City Council and a victim surcharge of £120. The Court heard that the company was convicted of two similar charges last year in respect of the same site when they were ordered to pay fines and costs totalling £2,900.00. The company,was not represented in court, but a director acknowledged the summonses and indicated a guilty plea.

The summons were issued after residents living in and around the London Road area of Brighton were driven to distraction by noise from the redevelopment of the former Co-Op building.

The council imposed a condition that construction work be limited to between 8am and 6pm Monday to Friday and 9am to 1pm on Saturday but residents, some with young children, have complained they have been disturbed by noise through weekends, early in the morning and late at night.

Noise has included lorries moving about late at night, the noise of nail guns and saws all day Saturday, a generator running until 10pm, builders throwing items from the top floor of the new building down into a skip at ground level, skips being collected at 6.30am in the morning and forklift trucks continuously using reversing bleepers straight into a resident’s living room.

Brighton & Hove City Council’s environmental protection team successfully prosecuted the company in November last year for noise but it continued to cause problems, failing to respond to numerous letters and warnings from the council and ignoring a ‘Section 61’ agreement to minimise noise for residents and restrict hours of construction work.

Councillor Pete West, chair of the city’s environment committee, said: “Large redevelopments such as this one should be carried out within reasonable hours and with consideration to people living nearby. This company has given residents no respite, with noise from the site seven days a week causing considerable stress and disturbance. We had no hesitation in taking legal action to protect residents and make sure the company, which agreed to control noise from the site, takes steps to do so.”

The site at 94-103 London Road is being redeveloped as student accommodation.