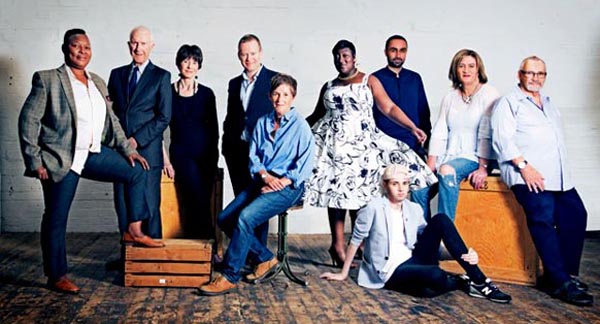 Keith was imprisoned in 1956 after being found with another man while he served as an officer in the Royal Navy. He was just 20 years old found and celebrated his 21st birthday in prison, at Her Majesty’s Pleasure.

Hosted by TV personality, author and fashion consultant Gok Wan, the exclusive, invite-only lunch formally kicked off Pride in London celebrations, celebrating the lives of ten individuals who had made a significant contribution to LGBT+ communities all over the country.

The Attitude Pride Award winners 2017 were:

Keith Biddlecombe was imprisoned for being gay in 1956. He received his award from journalist and commentator, Owen Jones. Keith, accepted the award on behalf of all the men who were imprisoned before the decriminalisation of homosexuality. He is a members of Brighton GEMS, the social networking group for older gay men and designed and made the cover for the Brighton Aids Memorial when it was unveiled in November, 2009.
To view video, click here:

Martyn Hett, was one of the twenty-two victims of the Manchester terrorist attack earlier this year. He was awarded an award posthumously to recognise how living life openly, honestly and being unashamedly proud of your sexuality is in itself a powerful form of activism. A huge fan of Coronation Street (Martyn had a Deirdre Barlow tattoo on his leg), the award was presented by Coronation Street actress Helen Worth and collected by Martyn’s sisters, mother and partner.

Dean Eastmond, was recognised for his campaigning work for equal fertility rights for men in same-sex relationships, raising awareness of issues around sexual assault, and his personal battle with cancer. He received his awarded by Radio 1 DJ Nick Grimshaw.

Former Attitude editor Matthew Todd was presented his accolade by Davina McCall in light of his work to encourage awareness of gay mental health and addiction – following the release of his book Straight Jacket.

Bernard and Terry Reed, founders of the Gender Identity Research Education Society, were recognised for their work in support of their trans daughter, who experienced mental health issues due to gender discrimination and bullying. The award was presented by Robert ‘Judge’ Rinder.

Channel 4 News’ Cathy Newman presented an award to Booan Temple, one of the activists from ‘Lesbians Against the Clause’, the group who famously gatecrashed a live BBC News broadcast and abseiled into the House of Lords in protest of Section 28, which specified that local authorities should not promote or discuss homosexuality.

Author Juno Dawson presented an award to Natalie Scott, a transgender LGBT+ activist and support worker who continues to do significant and important work in raising the profile of trans issues in Scotland.

Awards host Gok Wan, said: “It was an absolute honour to host the Attitude Pride Awards today on the eve of Pride in London. The team at Attitude have done a great job of recognising the achievements of these 10 incredible, truly inspiring people and highlighting their powerful stories.”