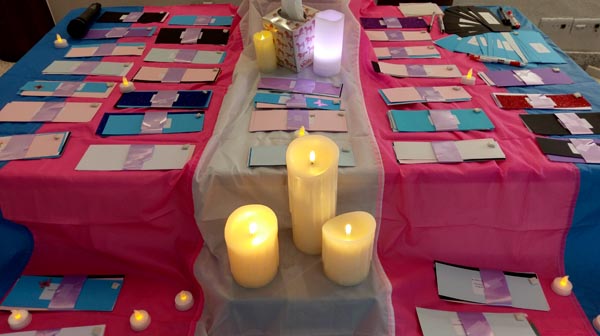 It was standing room only at the annual Transgender Day of Remembrance Vigil at Dorset Gardens Methodist Church on Sunday, November 18.

Stephanie Jayne Scott and Sam Hall hosted the vigil and the Rainbow Chorus conducted by their musical director Aneesa Chaudhry provided the musical interludes culminating with a beautiful rendition of ‘This is me’.

Ruben from Transformers spoke about the need to continue to be hopeful and the power of activism in inspiring young people. Sam from Clare Project spoke about being born into a binary world and his  insights into gender and privilege. Stephanie spoke about the very first TDoR that they helped to organise and their hope that in the years to come there would be less pain and suffering.

Everyone attending was invited to help create a Wall of Names on the side of the chapel to those who had lost their lives in the last year worldwide. This has now been moved to the round flint chapel on the ground floor at Dorset Gardens, for quiet reflection and remembrance all this week.

Politicians from Labour and the Greens attended as did senior police officers from Sussex Police who attended out of uniform along with representatives from many LGBT+ groups and organisations.

Lunch Positive provided tea and sandwiches at the social event following the end of the service.

For a full list of the names of those who lost their lives in the last twelve months, click here: