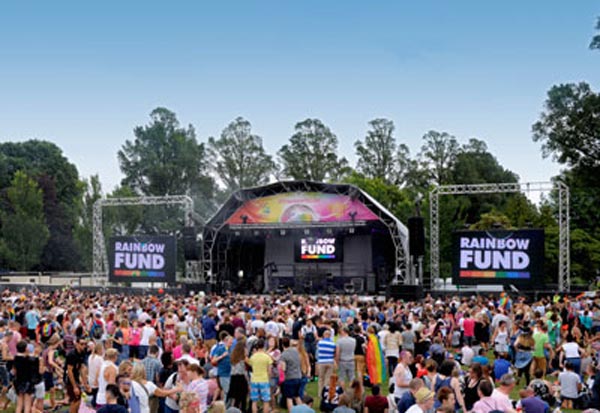 THE PRIDE Festival and Pride Village Party in 2014 were hailed a resounding success raising almost £65,000 for local LGBT community organisations while delivering a safe and diverse weekend.

Following broad feedback from community groups, Pride plan to set up a new community fund that’s could benefit local projects where Pride has a social impact on local residents.

Brighton Pride director Paul Kemp, explains: “Pride have been gathering feedback from a variety of community sources and would like to thank everyone for their constructive feedback. The majority of community feedback has been positive with many feeling the village party was a safer and more controlled event, but recognise we still have lots of work to do on improving the impact on the local area.

Pride remain committed to our ongoing fundraising for the Rainbow Fund but we hope to set up a new fund that could benefit all our communities in the area’s most affected by the social impact of the Pride weekend celebrations. Our priority remains to deliver a safe and sustainable Pride weekend but with the continued support of local businesses for the Pride Village party 2015 we hope that more local good causes that benefit all our communities could be supported in the future”

After meeting with Friends of Preston Park and local residents after this years Pride event, Pride are also considering options for better use of the infrastructure on Preston park for a possible community and family event on the Sunday of Pride weekend.

Paul Kemp continues: “This certainly won’t be a second Pride day on Preston park as Pride’s main focus will be to build on the success of the Pride village party Sunday, but it seems a shame not to utilise the park facilities for wider community use.

“Pride will continue with our ongoing community engagement as we move forward in planning Pride 2015.”

Pride have asked for suggestions to what local residents would like to see taking place on the park.

James Ledward, editor of Gscene, said: “For many years Pride failed in its primary duty of raising money to benefit local LGBT/HIV organisations who provide effective front line services to LGBT people in Brighton and Hove culminating with the old organisation ceasing trading with huge debts as recently as 2012 .

“The present organisers have now created a model that guarantees money is raised every year to support those groups and this funding stream will become vital to the very survival of all LGBT/HIV organisations over the next two years as statutory funding streams to the voluntary sector are cut in line with Government policy.

“The success of Brighton Pride is integral to the success of the local economy in Brighton and Hove and that will only continue while everyone continues to support the organisers in moving their plans forward in 2015.

“Brighton Pride is now viewed internationally as a ‘blue ribboned’ event with a reputation of excellence in concept and delivery and importantly benefits all sections of the community both gay and straight in Brighton & Hove. Long may that continue and well done to everyone that has made it happen.”