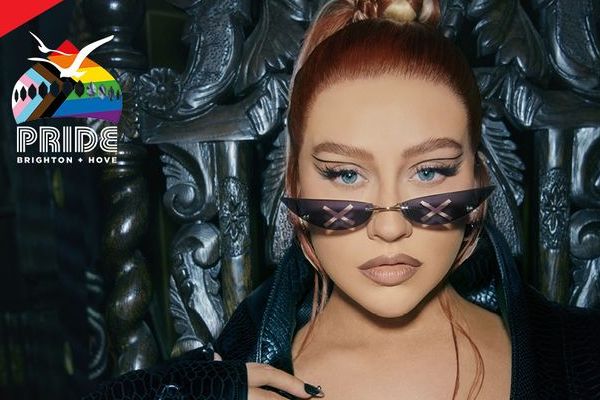 Brighton Pride is the biggest Pride festival in the UK. It’s sort of like the gay Glastonbury. Recent headliners have included Britney Spears, Grace Jones, Pet Shop Boys, Years and Years, Dua Lipa, Carly Rae Jepsen, Fatboy Slim, Paloma Faith and Jessie J. Mariah Carey herself was set to headline in 2020, but Miss Rona swept the world and everything was cancelled.

Brighton Pride was due to return the following year, but ongoing uncertainty surrounding social distancing led to a second cancellation. After two missed years, Brighton Pride 2022 could well be the biggest one yet. Christina Aguilera will headline on Saturday and Paloma Faith headlines on Sunday.

How many people attend Brighton Pride?

As Brighton is fairly small, Pride really does take over the whole city. London Pride takes over Soho, but after the parade London Pride is basically a ton of after parties spread out all over the place. Obviously London Pride is a lot of fun, but Brighton Pride is more fun as it literally becomes Pride City.

How do I get my Brighton Pride ticket?

Brighton Pride does tend to sell out. It’s worth getting your ticket in advance. There are multiple ticket releases, the first being slightly cheaper. The second release will see the prices go up. When the headliner is announced – Britney! Mariah! etc – there tends to be a scramble for tickets. Get your Brighton Pride ticket early to avoid disappointment.

There are three separate things you can get tickets for. We’ll look at those next.

Fabuloso in the Park

There are two Fabuloso events, one on Saturday (with the main headliner) and another on Sunday. You can buy a ticket for one of the events or get a weekend pass for both.

The Saturday event tends to be busier – as in so busy you can’t move or get a phone signal. As a lot of Brighton Pride visitors will leave on Sunday the park will be less busy. The Sunday event is loads of fun – it tends to be a bit more chilled. Sunday headliners have included the likes of Chic and Grace Jones.

The Saturday gig is the main event. Leave in good time if you’re getting a train home on Saturday evening. It can take a while to get out of the park. Thousands of people were stuck in Brighton the year Britney played.

This event takes over most of Kemptown. You’ll need to buy a ticket and get a wristband to attend. Pride Village Party is basically a massive rave on the seafront. You can’t bring booze in but there are shops on St James Street where you can buy some. This is always one of the highlights of Brighton Pride. In the baking hot sun you’ll be surrounded by people dancing and drinking all day long.

One one of the best places to attend the street party is at The Actors, formerly The Marlborough Pub & Theatre. The bar directly overlooks Brighton Pavilion. It’s a great place to enjoy the street party as the sun sets over the Prince Regent’s pleasure palace. It will make your experience very… Brighton.

Booking a hotel for Brighton Pride can be tricky. Hotels in Brighton are tricky even outside of Pride – they really aren’t cheap! Airbnb is always an option. Prices will be inflated over Pride weekend. The population of the city more than doubles so people need somewhere to stay, obvs. If hotels are full or too expensive you could try camping.

The Brighton Pride Camp Camp is open from Friday to Monday. This is one way to solve the accommodation issue.

When you go to Preston Park it’s best to stay with your mates. With around half a million people to contend with it can be very difficult to get a phone signal. If you lose people you may struggle to locate them again. Also, you cannot bring booze into Preston Park. You’ll have to buy drinks when you’re through the barrier. As it’s so busy, the queues can be long. And by long we mean really long.

We’re not suggesting you load up before entering Preston Park (drink responsibly, mm’kay?). But if you do want to be merry by the time Britney or Mariah take the stage then yeah, load up before you go in. Oh, and this one may seem obvious but drugs are a complete no no. They even have sniffer dogs at some of the gates. You wouldn’t want to get barked at by one of the pride dogs.

What happens to the non gay bars?

What happens to the gay bars?

They become even more LGBT+ than usual. Oh, and they do fill up. There will be queues outside Revenge. Even Britney Spears’ dancers took a trip to Legends after they’d left the stage. The only snag is you’ll have to pay entry to most of the gay bars over Pride weekend.

As both the 2020 and 2021 events had to be cancelled, the 2022 event has to bring Brighton Pride roaring back in style. This event has a huge amount to live up to – hello, Britney! We’re sure Christina is more than capable of topping the performance of her longterm frenemy.