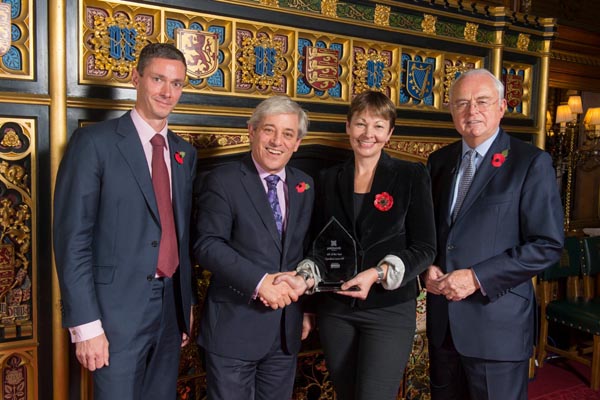 THE AWARD recognises those MPs who have represented and work well with underrepresented, deprived and minority communities across the country.

Over 90 MPs were nominated including members from different faith groups and ethnic backgrounds and were judged by 5 key criteria:

• Other communities traditionally excluded by the political process

The award was announced from the State Rooms, in the Speaker’s House.

The Rt Hon John Bercow MP said: “I would like to give my best wishes to the Patchwork Foundation and congratulate them for their work over the last 12 months.”

Caroline Lucas, MP for Brighton Pavilion, said: “I’m honoured to have been nominated for this Patchwork Foundation award, and delighted to have won. Sadly there is still a long way to go in terms of addressing the huge underrepresentation of minority and deprived communities, both in society and in parliament itself.  As MP for Brighton Pavilion, I am committed to continuing to do all I can to support and engage with those communities and to prevent people from being excluded from the political process.”

Rt Hon David Cameron MP, The Prime Minister added: “I am proud to support the ground-breaking work of the Patchwork Foundation.  The organisation has helped thousands of young people from under-represented communities engage in the political process.  From holding community engagement events attended by thousands of people, to small master classes with senior political figures, the Foundation is leading the way in making politics more accessible to all, regardless of where you live, where you come from, your age, ethnicity or background.”

Jonathan Holt KPMG Partner, said: “We are delighted to sponsor these awards and help Patchwork encouraging under represented communities connect with the political process. The work done by their volunteers and the time they commit will hopefully inspire young people in all communities to fulfil their true potential. How organisations work with, and within, their local communities is a critical part of inspiring young people. That’s why KPMG pioneered a School Leaver Programme, a Business Support Academy and why, only last month KPMG hosted a series of events promoting the importance of inclusion in the workplace. We committed ourselves to ambitions which are quantifiable and against we can be judged – and these targets span across the four areas of gender, ethnicity, disability and sexual orientation. The fact is, everyone has the right to feel safe from discrimination and bring their whole self to work so that they can fulfil their own potential.”

Simon Woolley, OBV Founder and Patchwork National Advisory Board Member, concluded: “The MP of the Year Awards not only highlights the work MPs are doing to better understand their diverse communities, it also applauds those MP’s who are encouraging greater civic and political engagement. With many young people, particularly from BME communities feeling a huge disconnect from our elected representatives, the MP of the year awards should be a reminder to all MP’s that we expect them to give voice to those unheard, and in doing so the whole of society benefits.”