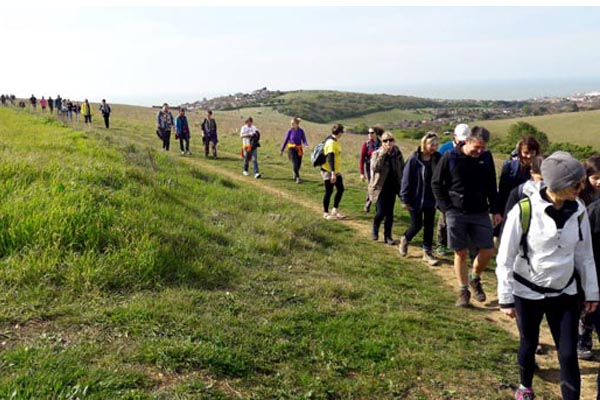 After collecting thousand of pounds for the Mayor’s 27 chosen charities, the walkers and the Mayor decided to campaign to make the 27 Km trail a permanent way marked route.

With the support of council officers Cllr West is aiming to create a B&H Way Association, that will work to establish and care for the route and promotes its use.

The inaugural meeting will be in the Council Chamber at Hove Town Hall on Tuesday, November 21, from 6.30-7.30pm.

The B&H Way follows existing rights of way from Saltdean Oval to Emmaus Portslade, giving walkers the opportunity to discover some of the best of Brighton’s downland, while never being far from the city edge.

Cllr Pete West, said: “Easily accessible by public transport and radial walking routes from the city centre, the B&H Way offers a great opportunity for more people, both residents and visitors, to get out and enjoy the richness of the South Downs National Park which is on our doorstep.”

Lead charity Rise UK are planning another sponsored walk of the B&H Way in Spring, 2018, which organisers hope will become an annual event.

If you want to support getting the B&H Way up and running, recognised and well cared for go along to the inaugural meeting and help found the Association.

If you wish to attend RSVP to: brightonandhoveway@gmail.com