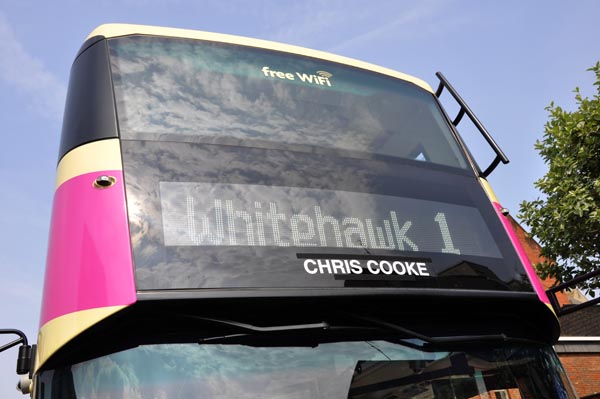 Brighton & Hove Bus Company have named one of their new buses after community activist and LGBT campaigner Christopher Martyn Cooke.

Chris died earlier this year following a fire in his flat on the 13th floor of the Essex Place tower block off Montague Street in Kemp Town.

Chris, a well-known activist in the Kemp Town and St James’s Street areas of Brighton campaigned both for the local neighbourhoods and gay rights and was connected with a large number of LGBT and generic community organisations.

He chaired the Eastern Road partnership and the tenants association at Essex Place. He worked tirelessly and effectively on neighbourhood and community policing. He was a founder member and the first chair of the St James’s Community Action Group and secretary of the area action group. He was active in the Friends of Queen’s Park and organised the Kemptown in Bloom contest.

Commissioning editor at Gscene, James Ledward, said: “Chris loved helping other people and was an effective advocate for all communities. He would just pick up the telephone to get things done quickly. St James Street and Kemptown has been a poorer rundown place since his passing.”

In recent times Chris had chaired the Brighton and Hove LGBT Community Safety Forum and supported the Gay Business Forum. He was a former trustee of Spectrum, the LGBT umbrella strategy group and had chaired the fund-raising committee of the Rainbow Fund. He was a columnist for the Kemptown Rag and a former community correspondent for the Argus.

All this and more besides was in addition to his full time job as head of finance and fund-raising at the Sussex Beacon in 2012.

Simon Burgess, a former leader of the City Council, Queens Park Councillor and Chair of St James’s action group, added: “To name a no 1 after Chris is perfect. The bus will be travelling daily through the areas, and past the people, that Chris cared about so passionately. A truly appropriate and lovely way to mark his contribution to the community.”

Friend and activist Steve Parry, concluded: “It will be wonderful for people who were touched by Chris to say how much our Community benefited from his involvement. He was a genuine community activist who deserves our respect. He was also a lovely guy.”

There will be a memorial service for Chris at St Mary Church, St James Street, Kemptown on Sunday, June 19 at 3pm. Brighton Gay Men’s Chorus will sing at the event which has been organised by friends and colleagues of Chris.

For further details and to indicate your attendance, click here: