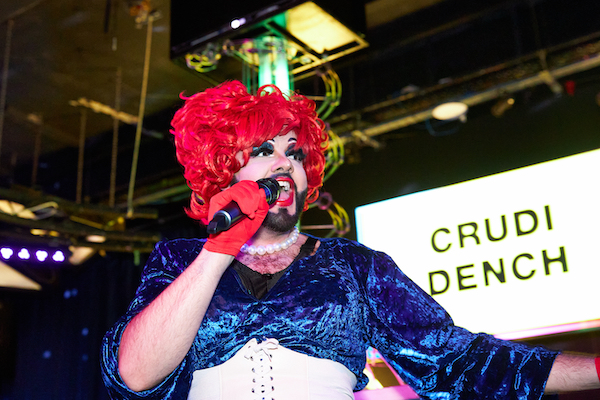 Set in the heart of Hounsditch, close to Shoreditch in East London, Dabbers is where the ‘cool’ bingo kids go. As for the callers – with Dabbers Social Bingo, gone are the days of dusty old callers mumbling “two fat ladies – 88” into the microphone, now callers get a chance to truly work the room as they are encouraged to bring their talents to the stage, be that comedy, cabaret, music, or any form of performance.

In the Next Top Bingo Caller competition, the ultimate victor will win £1,000 courtesy of sponsors Malibu, plus a 12-month contract with Dabbers Social Bingo and luxurious hotel stay, as he/she/they will get the opportunity to reinvent, transform and revamp the sought-after and glorious position of Bingo Caller.

Crudi Dench is the drag persona of Matt Stallworthy. Originally from Liverpool, Matt started drag in York while at university. While in York, he helped set up Haus of Dench – a group of drag performers creating spaces for LGBTQ+ creatives to showcase their talents, including the cult cabaret / club night Lip Sync Lollapalooza.

Matt has recently moved to Brighton following the tail end of the pandemic and has just finished a run at of his show Drag Queens vs. Zombies during the Brighton Fringe. He believes the city is the perfect place to perform and is very keen to bring his ‘distinctively Northern flavour of drag to the South Coast’.

After Crudi Dench secured the most votes back in April at the knockout stages to then winning over the audience at the Semi Finalists early this month, she will now join three other contestants at The Finals on Sunday, July 3.