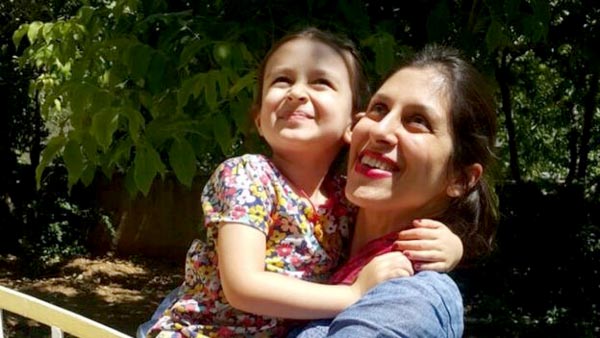 As the Boris Johnson and Jeremy Hunt roadshow hits a town near you, it is crucial that the questions they face are not only about #Brexit.

BEFORE they can secure the keys to Number 10, they should certainly make a stop at London’s latest tent city whose existence is a direct result of an international crisis that they have both failed to resolve.

Outside the Iranian embassy in Knightsbridge, one of London’s finest neighbourhoods, a desperate father is on the street.

Wedged between the car of the Iranian ambassador, Hamid Baeidinejad, and the iron railings of the Kensington mansion block that houses the embassy, sits Richard Ratcliffe, who is now in the second week of his hunger strike in support of his wife, Nazanin Zaghari-Ratcliffe, who is also on hunger strike in an isolated Iranian prison cell. He is surrounded by small tents and a blanket of flowers, while behind him looms a giant metal screen which was erected in front of the railings by embassy staff and which has become a huge noticeboard bearing messages of solidarity, love and goodwill from the steady stream of visitors Richard constantly receives, people from all walks of life, ages, faiths and nationalities, including many Iranians and MPs from across the political spectrum, all horrified that an ordinary family on holiday could find themselves ripped apart by opaque international politics they do not understand.

Meeting Richard to interview him for this article had something of a spiritual pilgrimage about it. He is really no different from any of us, just an ordinary man caught up in circumstances beyond his control, and yet a tangible and distinctive energy radiates from this deeply loving husband and father that impresses, humbles and inspires everyone who meets him. Some of these people, recognising how extraordinary he is and horrified by what has happened to this family, have stayed and have formed a small support team around him, the main focus of whose activity on the afternoon of my visit was pleading with the crowd not to touch, lean or even breathe on the ambassador’s car. As Richard and I begin our interview, the embassy staff decide to start painting the railings, for no obvious reason.

Both candidates in the race to be our next prime minister, Johnson and Hunt, are implicated in this tragic situation. While foreign secretary, Boris Johnson not only failed to secure Nazanin’s release but managed to make matters much worse when he told a parliamentary committee that Nazanin was “simply teaching people journalism,” a statement which the Iranian government seized on as proof that she was engaged in “propaganda against the regime”.

Utterly and disastrously wrong! Nazanin worked for an international charity, but her visit to Iran was an entirely private, family affair; she was taking their five-year-old daughter, Gabriella, to visit her Iranian grandparents. Mr Johnson is always very quick to distance himself from the fallout from his disastrous, cavalier and incompetent intervention, especially when the Tory-leadership race was underway, and this has outraged Richard. He was particularly upset by Johnson’s comments during the BBC debate that attempted to minimise the significance of his gaff. Richard insists that Johnson’s laziness had certainly aggravated the situation, and feels even more betrayed as he had genuinely believed, on the basis of assurances given to him by Johnson, that the foreign secretary would eventually have been able to bring his family’s nightmare to an end.

I doubt that Johnson will take the time to come and visit Richard as he keeps his vigil. Shielded from any proper scrutiny or questioning by expensive PR and media gurus, he is keen to push to one side the mess and embarrassment he caused the government and the foreign office by spectacularly failing in his duty of care to this British family, and to have people focus instead on his supposedly highly successful time as Mayor of London. He would be more than happy for the plight of Gabriella, her mum and dad, and her grandparents to fade into complete obscurity. I sincerely hope that we will not allow this to happen. It is precisely by giving his tired “do or die” mantras a rest and by meeting Richard, and engaging humbly and honesty with his family’s situation and the part he played in it, that Johnson could begin to display something like the moral fibre we should require of our prime minister.

It is Jeremy Hunt who, as foreign secretary, is now responsible for dealing with this situation, and the way in which he goes about securing Nazanin’s release must surely be regarded as one of the most important tests of his fitness to be our prime minister. The first responsibility of any government, and of the prime minister who leads it, is the safety of British citizens, and yet the two candidates very much give the impression that they have not been and still are not taking seriously enough the fact that a five-year-old British citizen, Gabriella, has had her British passport confiscated and is being prevented from returning to Britain and being reunited with her father while her mother’s mental and physical health continues to deteriorate as she is held captive by the Revolutionary Guard. What has happened to this ordinary family could happen to anyone of us who wishes or needs to travel in this increasingly unpredictable world, and we would certainly like to think that our government would do everything in its power to look after us.

We can all do something to help the Zaghari-Ratcliffes. Almost 3 million people so far have signed the Free Nazanin Ratcliff petition on the Change.org website (http://chng.it/MV6774YV5j) and a new global Twitterstorm campaign will be launched on July 4, 2019, 8-9pm GMT, and will then take place at the same time on the first Thursday of every month, the same time slot that was used for the enormously successful Twitterstorm campaign that secured the release of the Yemeni civil-rights activist Hisham Al-Omeisy.

A new, global children’s postcard-writing campaign is also being launched, in the hope that the gentle and wise voices of children will be able to succeed where the often inappropriate and careless words of adults have failed. Parents, teachers, youth workers, and everyone who works or cares for children, can tell them about what has been happening to Gabriella and her mum and dad, and help and encourage them to write a postcard to Hassan Rouhani, the president of Iran, expressing in loving and gentle words their concern and support for Gabriella and asking him to do what he can for her and her parents.

Postcards should be sent to:

It is hoped that he will very soon receive over a million postcards and that they will remind him of what he swore to do in the oath he took when he first became president:

“I, as the President, upon the Holy Qur’an and in the presence of the Iranian nation, do hereby swear in the name of Almighty God to safeguard the official Faith, the system of the Islamic republic and the Constitution of the country; to use all my talents and abilities in the discharge of responsibilities undertaken by me; to devote myself to the service of the people, glory of the country, promotion of religion and morality, support of right and propagation of justice; to refrain from being autocratic; to protect the freedom and dignity of individuals and the rights of the Nation recognized by the Constitution; to spare no efforts in safeguarding the frontiers and the political, economic and cultural freedoms of the country; to guard the power entrusted to me by the Nation as a sacred trust like an honest and faithful trustee, by seeking help from God and following the example of the Prophet of Islam and the sacred Imams, peace be upon them, and to entrust it to the one elected by the Nation after me.”

Ray Barron Woolford latest book is The Last Queen of Scotland the biography of most important UK & Scot born LGBTQ Civil Rights activist of the past 100 years, Kath Duncan. Published by Austin Macauley