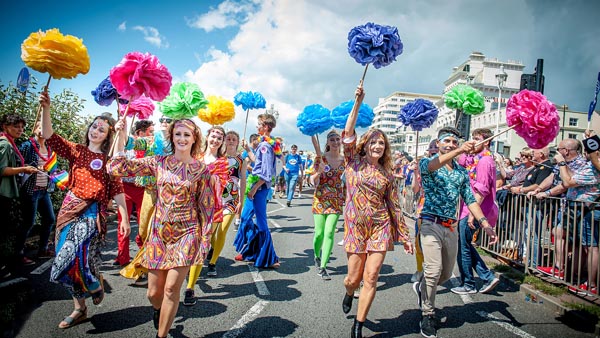 Community groups and good causes across the city are invited to bid for grants to put ‘Pride in our city.’

FOR one weekend every year, hundreds of thousands of people flock to Brighton and Hove to mark the LGBT+ celebration, which is Brighton Pride, one of the biggest Prides in the UK.

Community groups are now being invited to bid for money raised from the event to ensure that the positive message of Pride has an impact on areas of the city all year round.

Now in its fourth year, the Pride Social Impact Fund is accepting applications from groups or organisations which need a helping hand in making a difference in their communities.

“I am delighted to say that this year we have a record amount of money to distribute. This includes the potential to support one or two larger bids, providing they can prove they comprehensively meet the fund’s criteria and will directly supported residents who live in or near the footprint of Pride.

“So whether your idea is big or small, I urge groups across the city to submit their bids as soon as they can and look forward to being able to help some amazing grassroots groups put a little bit of Pride back into our city.”

Launched in 2016, the Pride Social Impact Fund has so far distributed more than £40,000 to groups in Brighton and Hove.

Projects put forward do not have to be LGBT related; they don’t even have to be directly-linked to Pride (although applicants directly impacted will be favoured).

However big or small, the only criteria is that it will brighten up people’s lives by the time Pride comes round again next year.

Funding comes from a ring fenced £1 per ticket from LoveBn1 festival in Preston Park of £14,415 and contributions made by businesses within the Pride Village Party in the St James’s Street area of £9,584.58, as well as extra top up funding of £4,669 from Pride CIC.

The application process for this year’s fund is open now and bids will be considered by a panel made up of representatives from The Argus, BBC Sussex, Capitol Brighton, Brighton and Hove Independent, Sussex Life, Brighton & Hove News, Gscene, Latest magazine and Latest TV.

Last year the panel handed out nearly £20,000 to nearly 30 community groups and charities across Brighton and Hove.

This included supporting projects as varied as funding to the Friends of Dorset Gardens to improve accessibility of a park, £450 to Creative Cascade Recovery to support the creation of free community performances for a group which supports people in recovery from addictions; and £500 to Saltdean Lido towards plants for garden beds at the heart of the pool and community centre.

One of the grants awarded was £1,000 to towards the running of Tarner Young Women, which was set up to meet the needs of local girls and young women aged 12 upwards, many of whom are deemed at risk.

Emma Jacquest, of the Tarner Community Project, which runs the group, said: “Thank you for your support, this funding has made a huge difference for our especially vulnerable young people. It has averted many serious incidents taking place all of which would have put young people and others at serious risk.”

Another grant saw £400 awarded to Crew Club United, a newly-founded youth football team based in East Brighton. The grant went towards new tracksuits for a under-11s football team and also supported the club’s end of season awards.

Sharon Miller, of the club, said: “The team love their new tops which have kept them warm on these now crisp mornings while training. Thank you once again, we really appreciate it.”

The panel also awarded £500 to Hangleton & West Blatchington Foodbank to allow trustees to give out vouchers of £10 per client per month to a local butcher to ensure the provision of fresh meat for those in need.

Zoe Smith, of the food bank, said: “We are incredibly grateful for the support of the Brighton Pride Social Impact Fund. As a local Foodbank we work hard to support the needs of all members of the community and this grant will enable us to assist and make a positive impact to the health and wellbeing of people living in food poverty in the Hangleton and West Blatchington area of the city.”

How to apply
The Social Impact Fund has been set up to provide small grants for communal good. Grants are awarded annually to organisations or groups within the city with particular emphasis on areas directly affected or in the footprint of Brighton and Hove Pride.

Submissions should be a maximum of 400 words mapping out how the money will be spent and why the cause is deserving. Please note the maximum award will be £1,000. There is no lower limit.

The panel also has the potential of awarding one or two larger grants of up to £10,000 for 2018, but these bids need to comprehensively meet the criteria, namely supporting good causes in areas directly impacted by Pride.

There is no restriction on ‎numbers of entries by individual groups.‎ However, the emphasis is on supporting community and grassroots groups, rather than individuals.

Please submit your application by midday on November 30 by email to Bhsocialimpactfund@gmail.com.

Applications will be considered by a panel of local media representatives with successful applicants informed by the end of December.

Any money distributed needs to have had a visible outcome by the start of Pride 2019.