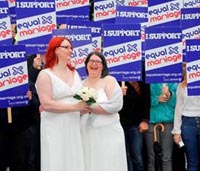 The Equality Network, a national charity working for lesbian, gay, bisexual and transgender (LGBT) equality and human rights in Scotland are inviting supporters to get involved in the filming of Scotland’s equal marriage video.

The final scene for the video will be filmed outside the Scottish Parliament in Edinburgh on Wednesday, June 5 at noon and equal marriage supporters from across Scotland are being invited to attend and take part in a crowd shot.

The video will be launched later this year as part of the final stage of the Equality Network’s campaign. The LGBT equality charity hopes the video will help build momentum and support in the run up to a vote on Scotland’s equal marriage bill.

“Over the past six years Scotland’s equal marriage campaign has involved many thousands of people from across the country. As we move into the final stage of our campaign it is vital that we continue to show MSPs the strength of support that exists for LGBT equality in Scotland. We want a large majority in the Scottish Parliament to send a message out to future generations of LGBT people that they are full and equal members of our society. That’s why we hope a large crowd of supporters will join us on Wednesday to show our politicians and the world that Scotland supports equal marriage.”

Supporters are welcome to turn up on the day, but the Equality Network is encouraging people to register their attendance in advance to help with planning:

The Scottish Government announced earlier this week that the Marriage and Civil Partnership (Scotland) Bill is still on track to be introduced by the end of June.

A consultation on the draft bill closed at the end of March, and the Equality Network has been pushing the Scottish Government to make the final bill as progressive as possible.

Key concerns include ensuring the legislation fully addresses the needs of trans and intersex people, ensuring all supportive religious and humanist bodies are given the right to conduct same-sex marriages, and securing mixed-sex civil partnership, which has always been a key part of the Equal Marriage campaign in Scotland.

To date over two thirds of MSPs have signed the Equality Network’s Equal Marriage Pledge, committing themselves to voting for same-sex marriage and mixed-sex civil partnership.

To see the voting intention of every MSP on equal marriage CLICK HERE: