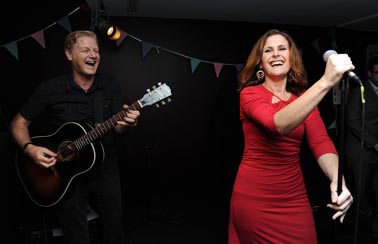 The Diversity Role Models (DRM’s) charity has raised over £76,000 at its first ever major fundraising event. High profile personalities and stars gathered at Paramount on Thursday, October 25 to support the inaugural fund-raising carnival and auction held by the leading anti-bullying charity, Diversity Role Models.

The highlight of the evening was when Alison Moyet took to the stage to perform a live set of some of her best-loved songs.

The auction lots included:
• A unique ceramic dog created and donated by Grayson Perry
• A day at the races with Clare Balding
• Afternoon tea at Claridges with Downton Abbey’s Lady Mary
• A swimming or dancing lesson with Olympian, Mark Foster
• A night at Bafta with Sophie Ward
• Night wave crashing 2012, an oil painting by Maggi Hambling
• Dinner or a personal training session with Ben Cohen
• A visit to Howard Hodgkin’s studio, hosted by Mr Hodgkin himself
• The chance for the winning bidder to be a named character in a new Patrick Gale novel.

By the end of the evening, the guests had raised a grand total of over £76,000 to support the growth of Diversity Role Model’s work in schools across the UK.

“We have been overwhelmed by the generosity and support shown to Diversity Role Models at our Carnival, which will enable us to expand our full-time staff and accelerate our ambitious plans to offer our life-changing pro-diversity, anti-homophobic workshops to pupils in schools across the UK. My final spur to creating the charity was the suicide of fifteen-year old Dominic Crouch who had been subjected to homophobic bullying by his schoolmates; it is only when tragic cases like this no longer occur that we will rest.

“Finally, I would like to take this opportunity to thank everyone involved in organising our Carnival for their time freely given in support of our cause.”

“To support Diversity Role Models is to support our children. Every family is diverse and every child has the right to grow into their own shape without intimidation or humiliation. At the Carnival we all felt the joy of acceptance. Not a big ask for any young person. I am very proud to be associated with Diversity Role Models.”