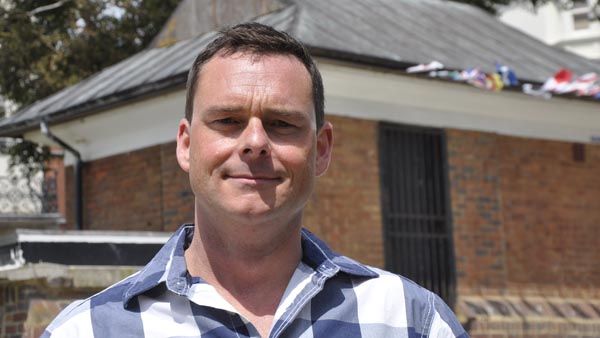 In the letter he asks them to use their influence to over turn NHS England’s decision to cancel the planned public consultation prior to making the HIV treatment pill Truvada available on the NHS, effectively putting the brakes on the drug being available for clinicians to freely prescribe and “failing those at risk of HIV”.

“I am writing this open letter in my capacity as Chief Executive of The Sussex Beacon.

“It was with great concern that I read about NHS England’s short sighted announcement regarding the provision of HIV Pre Exposure Prophylaxis (PrEP) drugs on the NHS in England.

“The current proposal is to provide £2million of funding over two years for gay men most at risk of acquiring HIV. This would equate to preventative treatment for approximately 500 people. It is estimated that over 5000 gay men will become infected with HIV over the next two years. Many of these infections would be prevented if PrEP were widely available.

“As you will be aware PrEP could play a key part in the reduction of HIV transmission in England, it therefore seems inconceivable that not prescribing this drug to men most at risk of contracting HIV is even being considered.

“Currently the only way to combat the HIV epidemic in the UK is through regular testing and prevention of transmission. PrEP offers a new alternative in HIV prevention and therefore I see no justification for this decision.

“Clinical trials and 18 months of work have clearly demonstrated the effectiveness and cost benefits of this HIV prevention drug, proven to be successful in stopping HIV transmission in almost every case if taken as advised.

“In the US, Canada, France, Israel and Kenya PrEP is widely available, the UK is world-renowned for its excellent HIV treatment and prevention services, a fact we should be proud of.

“Given the potential benefits of making this drug more widely available, I ask you to use your influence to lobby against this decision, driven purely by short-term financial savings and at the cost of long-term public health. A clear long-term strategy to tackle HIV transmission, which includes funding for access to PrEP, is needed as a matter of urgency.”

When NHS England announced last month that it held no responsibility to commission HIV prevention services, they announced they would instead provide £2m over the next two years to run a number of early implementer test sites for 500 men “most at risk”.

Ian Green, Terrence Higgins Trust CEO called the decision “shameful”: and said: “Over 2,500 men who have sex with men are diagnosed with HIV each year in the UK. This figure has not changed in a decade. It is quite clear that although we have had some huge advances in HIV treatment,  HIV prevention is something that we are still struggling with.

“By denying full availability of PrEP we are failing those who are at risk of HIV. Today’s decision by NHS England to depart with due process, and, instead, offer a tokenistic nod to what has the potential to revolutionise HIV prevention in the UK, is shameful.

“£2 million over two years for 500 gay men ‘most at risk’ is an arbitrary figure which seems ill thought out and will still deny the protection that PrEP offers to the people who most need it. We know that PrEP works and already have substantial data from a real world setting from the PROUD trial. PrEP has already been approved in the US, Kenya, Israel, Canada, France.

“And yet, our own government refuses to take responsibility for PrEP. Today’s statement makes it no clearer who is responsible – is it the Department of Health, local authorities, the NHS or Public Health England? We need answers , we need access., and we demand both.”

Peter Kyle, MP for Hove & Portslade, added: “THT are right to be shocked because during the election Tories were lining up to offer their support to widening the use of PrEP and backing their campaign. To abandon the consultation will deny HIV campaigners and health experts their chance to influence government policy into the future and could very well hinder the fight against HIV prevention for years to come.”

Simon Kirby MP for Brighton Kemptown & Peacehaven and a former vice chair of the All Party Parliamentary Group on HIV/AIDS said he had raised the issue with Ministers at the Department of Health who said: “We are committed to reducing HIV and sexually transmitted infections. NHS England will be running a number of test sites to use antiretroviral drugs to prevent the spread of HIV.

“These test sites will seek show how PrEP could be commissioned in the most cost effective and integrated way to reduce HIV and sexually transmitted infections in those at highest risk.

“Consistent condom use remains the best protection against all STIs, including HIV.”

Caroline Lucas, MP for Brighton Pavilion, concluded: “There is solid evidence to suggest that by widening the availability of PrEP we could cut the transmission rates of HIV. In that context it’s shameful that the Government isn’t putting its weight behind making PrEP fully available on the NHS to those who need it.”