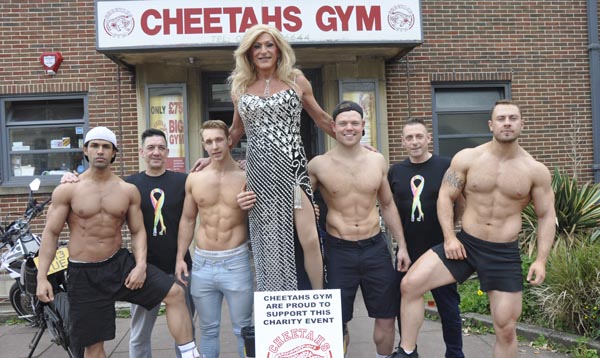 Local entertainer and Patron of the charity Cancer is a Drag, Dave Lynn receives donations from Cheetahs Gym and the Adonis Cabaret Show strippers for the cancer charity.

Cheetah’s Gym in Hove have donated buckets of spare change worth about £500 to the charity.

Tamzin Plank, manager at Cheetahs told the owner, Doc about the work of the cancer charity, and he agreed to donate the change to help their work. A telephone call to the Adonis Cabaret Show brought their strippers to the Gym along with owner Tristan Edwin Everard Mills who doubled the money in the buckets donating a further £500 to benefit the charity.

Cancer is a Drag was started 2003 and helps people living with cancer overcome financial difficulties they face on a day-to-day basis.

Founder, Alan Bugg, originally set up the charity in 2012 by creating an official Fundraising Group called Cancer is a Drag with Macmillan Cancer Support.

Alan was diagnosed with Grade 4 Non-Hodgkins Lymphoma in September 2010 and after many cycles of chemotherapy and not being able to work found himself struggling financially to make ends meet.

During these difficult times, it was Macmillan Cancer Support who offered the best advice on what little benefits were available to him. He realised that he was not alone in his financial struggle – struggling to survive physically, mentally, emotionally and now financially became a real Drag!

Cancer is a Drag was born out of this experience and being someone who had always loved to watch drag artists on T.V. and in bars on the LBGT+ scene, Alan came up with the idea of fundraising to give financial support to people and their families living with cancer by organising drag shows and events to benefit the charity.

Cancer is a Drag brings a slice of glamour, fabulousness and fun to the battle against cancer. A battle that can affect everyone in many ways. They received Charitable status in January this year; Registered Charity No. 1160129.