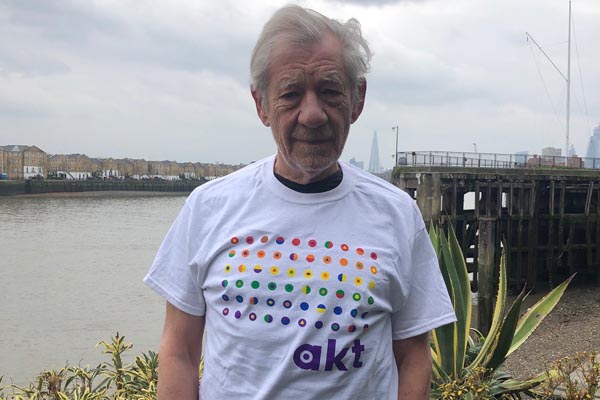 Albert Kennedy Trust unveils new brand identity including their own take on the rainbow flag.

Providing safe homes and better futures for LGBTQ+ young people, the new brand identity introduces akt’s own take on the rainbow flag, to create a contemporary, loud and proud accent of colour to its previously purple visual.

Tim Sigsworth, CEO, akt said: “Young people often talk about akt as providing more than just a roof over their heads, describing us as courageous, caring, inclusive and accepting – like a family. We wanted the new brand and the way we talk about our history and our work to reflect that.

“Nothing represents this more than our founder, ally and former foster carer Cath Johnson (nee Hall), who set up the charity in 1989 when lesbian, gay, bi and trans people faced extreme hostility in the UK.

“Cath spoke out and acted at a time when to do so was both controversial and rare, and stood shoulder to shoulder with our fellow founders in stepping in to ensure that vulnerable young LGBTQ+ people who were facing or experiencing homelessness had somewhere to turn.

“When talking to our young people today about akt and its journey, Cath’s selfless and unwavering support really stuck with them, and is something they wanted celebrated in how we talk about the organisation.

“Today, Cath still meets the young people we work with and is a huge supporter of what we do, and as we mark our 30th anniversary and continue to look ahead we want to celebrate and thank her for everything she’s done.

“akt is how our young people, supporters and the wider community have come to know us as we’ve grown, and so we’re pleased to own that in our new brand identity while still paying tribute to the young Albert Kennedy.”

The brand was designed by agency Derek&Eric, who worked on the project pro-bono for the charity.

akt was also supported by brand strategist Deborah Taffler in the new identity’s conception, as well as a team from law firm Baker & McKenzie in mark searching and trademarking the new brand. This was also done free of charge.

While akt was set up in 1989, LGBTQ+ youth homelessness remains a huge issue in the UK, with almost one quarter of young people facing homelessness identifying as lesbian, gay, bi or trans.

Of these, 77 per cent are in their situation due to familial rejection, ejection or abuse.

Adam Swan, at Creative Partner at Derek&Eric said: “Being part of the community, it’s such an honour to be working with a charity like akt, that make a genuine positive impact in young lgbtq+ people’s lives. We’re delighted to have created a brand that utilizes the colours of the iconic Pride flag to tell a new story about the strength of difference within a framework of supportive community”.