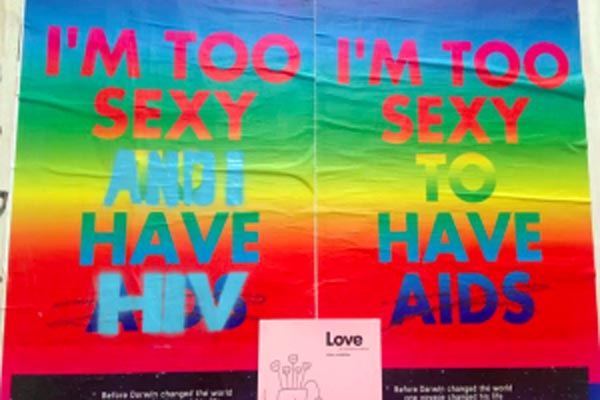 A series of I’m too Sexy to Have AIDS posters, displayed across London streets by art studio Studio Voltaire, have been ‘subvertised’ by new art collective ACT UP London, who changed the message of the posters to ‘I’m too Sexy and I Have HIV’.

Cé from ACT UP London said: “Firstly, I would like to say that the main thrust of the action was never intended to censor the artist or to silence queer voices. Expanding on this, it’s important to point out that although the artwork may have been targeted at those that understand where this comes from and why it exists, in its current state it is used out of context and isn’t helpful to the battles people living with HIV fight today.

“The use of this piece of art taken so out of context not only takes us backwards in a fight that we are already struggling to win, but it also contributes to the stigma surrounding HIV. On the back of this it has the potential to be traumatic for those living with HIV, particularly for those with new diagnoses and especially for those who don’t have sufficient support networks to speak through the emotions conjured by the text in the artwork.”

ACT UP London is a “diverse, non-partisan group of individuals united in anger and committed to creative action to end the HIV pandemic”. The group, part of the global ACT UP network, meets every fortnight and everyone is welcome.