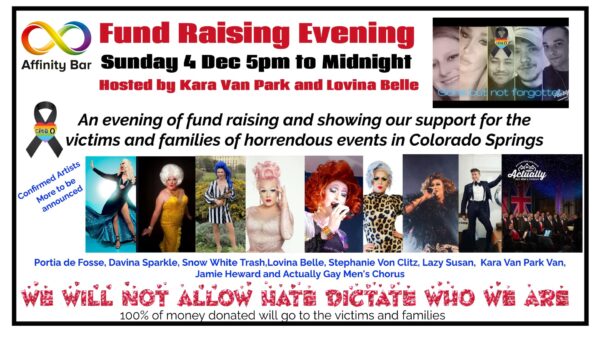 Affinity Bar Brighton is to hold a huge cabaret fundraiser for the victims and families of the Club Q attack on Sunday, December 4 from 5pm until midnight.

One-hundred per cent of money raised will go directly to the victims and families of those affected, including the five people who lost their lives: Daniel Aston, Derrick Rump, Kelly Loving, Ashley Paugh and Raymond Vance.

Affinity Bar Brighton say: “Our thoughts and prayers are with our friends and community in Colorado Springs.

“In order to show our support for our friends, we have decided to host a fundraiser charity event this Sunday with lots of fabulous entertainment.

“We would like to invite everyone to join us to show their solidarity for the community and raise money to support the victims families during this difficult time.”