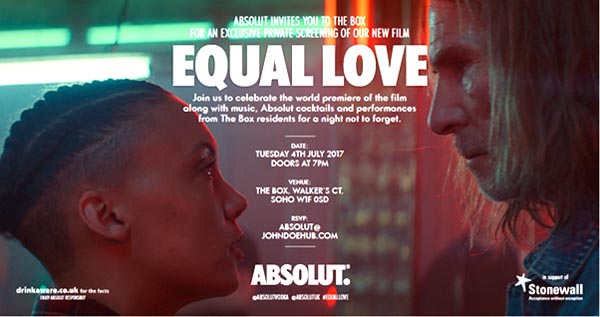 Absolut makes powerful statement about equality… without saying a word.

With Pride season underway in Britain, Absolut is celebrating everything the Pride season represents with the launch of a new film, Equal Love, a new limited-edition Rainbow bottle and a partnership with Stonewall, the LGBT+ Equality Charity.

The film features a never-ending kiss, symbolising freedom, self-expression, and an equal world accepting of all people.

The kisses seen in the film transcend sexual preference, gender, race and profession, and instead become a testament to equal love, reflecting Absolut’s belief that people should be free to love who they choose and builds on the brand’s progressive views and ongoing mission of championing equal love with a longer-term message of Create a Better Tomorrow, Tonight.

Shot with a diverse cast that was a dynamic mixture of street casting and professional actors, Equal Love was filmed by celebrated Northern Irish director Aoife McArdle, a filmmaker who has explored themes of equality in previous work, aligning perfectly with Absolut’s values.

She said: “I particularly loved the process of casting, and this script provided an opportunity to work with a large, diverse and striking cast. Because of the message of the film, and Absolut’s history of supporting LGBTQ and diversity in general, the unique casting process was front and center rather than a branding afterthought. Andy Warhol has done work on Absolut, as have Keith Haring and Tom Ford. It’s great to work within this tradition, push boundaries and this time experiment on film.”

The online release of Equal Love marks the launch of a series of activities planned by Absolut to celebrate diversity, champion openness and promote self-expression. The first being a partnership and collaboration with Stonewall in which together they will be launching a fun and new branded Snapchat lens available around the UK.

The film release also coincides with the launch of a new limited-edition Rainbow bottle and an Out Of Home advertising campaign, which includes an impactful takeover of the escalators at Oxford Circus ahead of London Pride.

Louise Smith, Director of Fundraising at Stonewall, said: “Prides are a chance for LGBT people to come together as a community, celebrate diversity and reflect on the challenges we still face.

“We love Absolut’s campaign as it’s based on this spirit of defiance. Absolut are part of our Diversity Champions programme, and we’re pleased that as well as working with us on their workplace equality, they are championing LGBT equality so visibly for this year’s Pride and helping to spread the message of acceptance without exception.”

Adam Boita, Pernod Ricard UK’s Head of Marketing spotlights why the brand’s extensive LGBTQ heritage and dedication to equality has given Absolut the understanding to create Equal Love:

“At Absolut, equality is at the heart of everything we do. In 1981, Absolut started running advertisements in gay magazines such as The Advocate and After Dark – which was groundbreaking three decades ago, when many brands shied away from LGBTQ issues for fear of alienating the more mainstream market.

“We’ve followed this up over decades sponsoring LGBTQ events, running further advertising campaigns, fundraising for LGBTQ charities such as Stonewall, and of course launching several rainbow-themed bottles. We feel proud to share this visual testament to our heritage and our ongoing commitment to creating a more equal world.”

Gaia Gilardini, Absolut Global Communications Director, added: “A pioneer for human rights in his time, Absolut’s Founder LO Smith rooted his passion for progression deep in the brand and over 135 years later, freedom of expression, progress and openness are at the core of everything we do. “Equal Love” continues this legacy by showcasing the kiss as a universal symbol for acceptance and love”.

For more information on the collaboration and upcoming projects, click here: