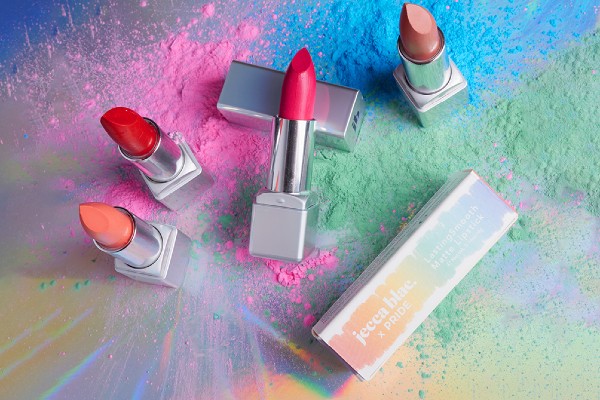 Humans have been wearing makeup for centuries; thought to have first been invented by the ancient Egyptians who utilised substances such as lead and clay to create lip colours and eyeliners, cosmetics continue to be a staple in many people’s daily lives. Despite being used by those other than cisgender women since its creation and loved by many LGBTQ+ and gender diverse people for its ability to allow for self-expression, the makeup industry has a history of gendering products to the extreme.

The early 21st century saw a phenomenon in which brands created tailored ‘makeup for men’ as the industry began to grapple with the notion that makeup is inherently gendered, but there still remained a sense of rigidity as products were divided into binary categories. However, the latter half of the 2010s saw a noticeable shift in the beauty industry – gender-neutral brands stormed onto the scene, with gender-neutral campaigns from top brands such as Milk Makeup and Fenty Beauty.

LGBTQ+ icon Lady Gaga even created her own makeup line designed to be inclusive of people of all gender identities. Gaga explained that it was through makeup that she created her identity, saying: “I found the superhero within me by looking in the mirror and seeing who I wanted to be.” For many other LGBTQ+ people like Gaga, makeup has been a lifeline, allowing them to present themselves in a way that reflects their inner self, with all-inclusive makeup brands creating a prejudice-free space for queer and gender-diverse people to experience the power of makeup.

Speaking to Scene, two of the top gender-neutral and LGBTQ+ inclusive beauty brands on the market today explained the importance of establishing safe spaces for everyone to express themselves in accordance with who they truly are. Alice Rhodes, co-founder of DEPIXYM, explained the brand’s origins, saying: “We felt there wasn’t a brand out there authentically for everyone, one that saw all types of people from all different backgrounds. There was a lack of products which offered people the creative freedom to do what they want outside of traditional beauty norms.”

The brand aims to platform those who have been made to feel like a ‘second thought’ by the beauty industry, adopting the strapline: ‘For Him. For Her. For Them.’ Here for those who have little experience with makeup, as well as top artists, Rhodes says: “Your level of experience doesn’t matter – it’s about people wanting to create and express themselves. We create a space for all users regardless of your background, sexuality or gender.”

Alongside creating cosmetics for all, DEPIXYM supports a handful of LGBTQ+ organisations through the sales of its products: “We don’t often shout about it because it’s just something we believe in supporting. We donate to akt and Mermaids UK all year round with our Pride Kit, and as we’re also huge believers in mental health awareness, we give to the charity Mind with our Starter Kit 2.” As the brand continues to grow, amassing more fans every day, Rhodes’ and the DEPIXYM team still have the same goal at heart: “We want to empower people and make people feel like they can be who they want to be, because that is sometimes the hardest thing to do.”

Another star player in the gender-neutral beauty industry is vegan brand Jecca Blac, with the mantra #MakeupHasNoGender. Marketing manager Maxine Heron told Scene that at Jecca Blac, they believe “makeup should be inclusive of ALL makeup wearers”, and explained the story of company founder and film makeup artist Jessica Blacker: “She opened a safe space makeup studio in her hometown in Wales, and quickly grew a customer base of predominantly trans women and femmes who were first experimenting with makeup. She realised the oversight of the beauty world which was doing nothing at the time to make transfeminine makeup wearers feel seen, catered to and celebrated.”

After that, Jecca Blac was born, and since then the brand has gone on to win a Beauty Bible Award, as well as hosting London’s first ever Trans Festival in early 2020. Heron said the brand is dedicated to supporting LGBTQ+ people: “We regularly partner with LGBTQ+ Charities including Mermaids, AKT Charity and Switchboard, and we have a trans inclusive team and work with LGBTQ+ models in our campaigns and projects.”

With plenty of free makeup advice online under the ‘Makeup Help’ tab and on Instagram @jeccablac, Jecca Blac “always endeavours to make our expertise available to our community.” According to Heron, Jecca Blac strives to always ensure LGBTQ+ people are “represented and celebrated all year round – and not just during Pride season!”