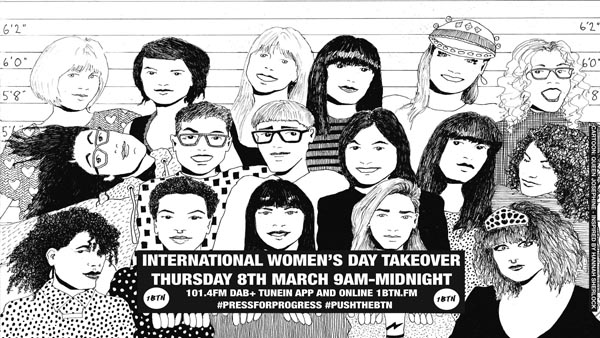 Based in Brighton & Hove but broadcasting worldwide via 1btn.fm, 1BTN has grown to become one of the UK’s most respected independent radio stations in just under three years. The diverse roster features over 180 presenters spanning more than 100 shows.

To celebrate this year’s International Women’s Day (IWD), 1BTN has announced that an exciting selection of the station’s talented female DJs and presenters, plus very special guests, will be taking over the station, all day tomorrow, Thursday, March 8.

The 1BTN IWD Takeover will start at 9am and continue until midnight, featuring an array of different genres – from Motown, reggae, disco and funk to house, new wave, pop and electronic.

International Women’s Day, a worldwide event that celebrates women’s achievements, whilst calling for gender equality is especially relevant in 2018 as this year marks the 100th anniversary of women’s suffrage.

With many music festivals and event line-ups often heavily weighted towards male artists, plus the gender pay gap and the rise of the #MeToo movement, there is still a lot of work to be done to achieve gender equality, especially in music and entertainment.

Talking about International Women’s Day, 1BTN presenter and musician Lucie Barat, said: “From the Pankhursts to the celebrities lending their name to the plight of women across the modern-day globe, it’s vitally important to celebrate the courageous and inspirational women who inspire us. The fight for equality is still very, very real.”

Hannah Sherlock (Love Is The Message), added: “IWD is an excuse to celebrate women – but also to remind ourselves the importance of striving for global gender equality.”

To listen to the 1BTN International Women’s Day Takeover, tune in to 1BTN from 9am to midnight on Thursday, March 8.

Listen via 101.4FM and DAB in the Brighton & Hove area, and on 1btn.fm anywhere in the world.